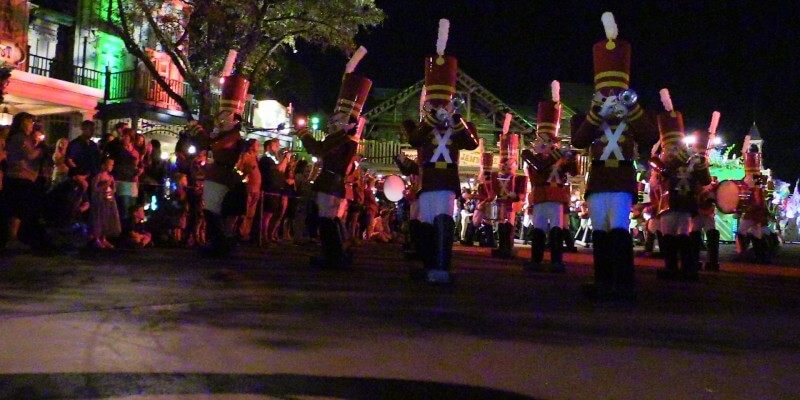 You can feel it everywhere you go; the holidays are upon us. From shopping malls to grocery stores, the spirit of Christmas is finding its way into our hearts once again. And with those warm feelings of sugarplums dancing in our heads, there’s no place that does Christmas better, than Walt Disney World.

All four parks get into the season with their decorating skills, but what truly heralds out the festive cheer is the “Once Upon A Christmastime Parade” at The Magic Kingdom. The parade runs twice nightly during the separate ticketed event “Mickey’s Very Merry Christmas Party” and becomes available to regular day guests (also being offered twice daily) starting December 20th until December 31st. All the favorites are here, from Mickey and Minnie, to the incredible Toy Soldiers from Babes in Toyland marching along the parade route. The sights and the sounds, and smells, bring this parade into a world of fantasy that only Disney could do. Highly themed parade floats, incredibly detailed costumes, adorable choreography between the characters and performers and of course, the big guy closes out the parade at the very end. Having Mickey and Minnie start the parade, to discovering jolly old St. Nick with his team of reindeer at the end, creates the perfect bookends to a fantastic whimsical fantasy of all things Christmas complete with snowfall along certain parts of the parade route.

Santa makes sure that all the best of the best shine bright during the parade, with Cinderella arriving in her Glass Coach pulled by miniature horses, and taking a break from decorating the castle, Princess Anna and Queen Elsa arrive for the fun pulled by a horse and carriage. Of course, not winter wonderland would be complete without a happy snowman named Olaf and the ice-man himself, Kristoff making an appearance. The entire Frozen gang shows up in their respective floats because what would winter be without snow, and that’s what they do best. The only chance to see the parade during the nighttime by attending the separate ticketed party, but be sure to follow along with Inside The Magic and we’ll be bringing you more holiday fun in the coming weeks, including video of this same parade when it begins its daily run the week before Christmas.