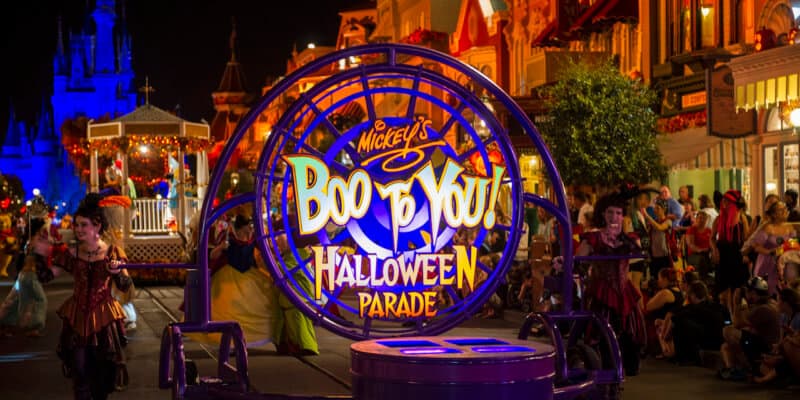 Halloween has come to the Disney Parks once again, and Guests have the chance to mix and mingle with their favorite characters in the spirit of the season at the Magic Kingdom.

Although there are plenty of places to spot familiar faces, the Magic Kingdom is home to some of the most memorable character experiences on Disney property, and their Halloween events are easily top-tier material for many park-goers. While traditional standards like Mickey, Minnie, and Goofy dressed in their finest fall attire are all pretty standard, Halloween is truly the time to see some of the more rarely-seen characters and cavalcades, especially in the Boo To You Parade.

While it’s fun to see characters dressed to the nines in their Halloween attire, especially Stitch in that awesome Elvis costume, Halloween is great for Guests wanting to rub elbows with some of Mickey’s more seasonal friends.

Characters like Jack and Sally are always a treat but watching characters like the Headless Horseman galloping down Main Street, U.S.A. is an event worth talking about. The Boo To You Parade is a great chance to see several characters, classic and rare, out for all Guests to see. You never know who might turn up, but this year’s parade has a few favorites.

The Pirates of the Caribbean are never far from their ship, commonly seen behind Tinkerbell’s treasure chest. Of course, Captain Jack would logically be at the helm of the Black Pearl, but it’s always nice to see Captain Barbossa and Angelica along for the ride as well. While Angelica might have sailed away on stranger tides, one would think that Barbossa would make more than a parade appearance due to his villainous nature. Either way, they can always be found sailing off along with their crew of color guard pirates.

Ghosts of the Haunted Mansion

One of the most visited attractions during the Halloween season is undoubtedly the Haunted Mansion, so it makes sense that its creepy characters would make an appearance during a Halloween parade. The creepy cavalcade is led by Constance Hatchaway, who leads a group of ghoulish ballroom dancers before being followed by a graveyard float featuring the Hitchhiking Ghosts. It would appear that their years of thumbing for rides pay off at least in time for Mickey’s Not-So-Scary Halloween Party.

While they aren’t exactly famous Disney characters in the literal sense, the Gravediggers are a set of familiar Cast Members seen in the Boo To You Parade every year and they’re something of a fan favorite amongst seasoned Disney Park Guests. If fans have attended Mickey’s Not-So-Scary Halloween Party at least once, they’ve seen the well-dressed ghouls and their sparking shovel routine. Over time, they’ve quickly become one of the most recognizable fixtures of both the parade and the seasonal event.

While it might seem strange to associate cowboys and hoedowns with Halloween, Disney made it happen. At least it allowed fans to see characters like Clarabelle Cow and Clara Cluck out and about for the parade. For those who are somewhat unfamiliar with the early days of Disney, these characters are part of Mickey’s crew and were frequently seen in many of his classic shorts. They might only appeal to a particular audience, but it’s still good to know the Disney Parks haven’t left them in mothballs.

Villains are already something of a rare species when it comes to Park characters, but Scar’s gang of cackling cronies are something very remarkable indeed. Easily some of the rarest characters around, Shenzi, Banzai, and Ed are typically saved for seasonal and special appearances, namely the Boo to You Parade. With The Lion King being the success it was, it’s honestly quite surprising that they don’t have more appearances.

When it comes to villainous sidekicks, Pain and Panic are easily a pair of the most entertaining. Their designs and over-the-top personalities practically demand that they be made into Parks characters. While their Meet-and-Greets might be something of a rarity, they can at least still be found as a part of the Boo To You Parade.

No Disney Halloween parade could ever be complete without at least a handful of classic villains, and 2022 certainly delivers on that notion. This year’s parade features appearances from Oogie Boogie, The Queen of Hearts, Bowler Hat Guy, Doctor Facilier, Cruella De Vil, Jafar, Maleficent and the Evil Queen. All these famous foes of Disney’s heroes bring the parade to a close with a grand finale of fearsome fun.

Who did you see during the Boo To You Parade at the Magic Kingdom? Tell us below!

Comments Off on Scarily Rare: Rare Characters Seen In The ‘Boo To You Parade’