Disney Guest Has Incredibly-Rare Experience, Pulls Sword From Stone at Magic Kingdom - Inside the Magic 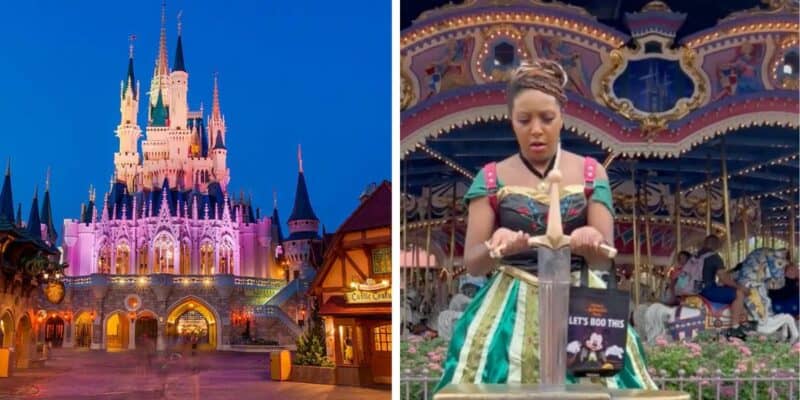 It’s every Guest’s dream to pull the sword out from the stone at Magic Kingdom, though few are actually able to do it. The sword sticking from the anvil on top of the stone practically teases all the Guests that curiously walk by.

However, it is not common for a Guest to be successful in their efforts and few Guests actually are lucky enough to be able to actually claim they have done it. It’s an extremely rare experience for the luckiest (and strongest) of Guests.

In the past, we have seen Guests successfully pull the sword out, but it doesn’t happen often.

One lucky Guest was shocked after they were able to pull the sword out in a video that was shared on Twitter. You can see it linked below, thanks to @phinphenomenon:

i became the one true king of england at #MickeysNotSoScary tonight 🫣 pic.twitter.com/GZJePFuWBW

As you can see, the Guest seemingly had no intention of actually being able to do it when all of a sudden, the sword moves and slides right out! The Sword in the Stone monument is located near Prince Charming’s Regal Carousel at Magic Kingdom in Walt Disney World. There is also another Sword in the Stone monument located in Disneyland Park, near King Arthur’s Carousel.

Back in 2020, a Disneyland Guest actually ripped the sword from the stone. Luckily Disney was able to refurbish it and replace the sword so that other Guests could attempt to lift the sword and be deemed King of Fantasyland.

Disneyland Paris has a similar version of this in its new Avengers Campus area, though this was removed recently due to damage after Guests climbed on the pedestal.

Have you ever been able to pull the sword from the stone?