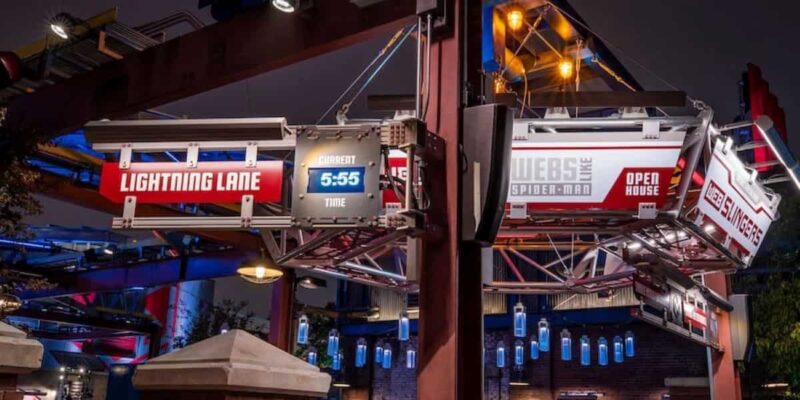 Spider-Man and the Avengers could be playing an even bigger role in the Disney Parks in the future.

The two attractions are very similar and feature Tom Holland reprising his role as Peter Parker/Spider-Man. In the ride, Disney Park Guests are tasked with helping wrangle rogue Spider-Bots from running amok on Avengers Campus. The attraction is made with impressive technology that allows Guests to make a motion like Spider-Man shooting a web, and these webs show up on the screen and help to capture the Spider-Bots.

One of the popular merchandise offerings in Avengers Campus is none other than WEB Tech. The merchandise, which has expanded and has several different versions, is a wearable device that can do projections and much more.

Now, it seems Disney is attempting to make the merchandise even more immersive and even create another attraction out of it, this time an interactive game.

Disney recently filed a patent “a gameplay system with play augmented by merchandise.” This patent– when the technology is implemented– will allow Guests to play interactive games while using their WEB Tech.

The description for the patent can be read below:

“A gameplay system for providing interactivity based on a piece of merchandise or other object held or worn by a player. The system includes an object identification assembly, which may be a modified computer vision system, that operates to sense, for a gameplay participant, the presence and identity of a particular augmenting object such as themed merchandise worn or held by a rider of a theme park ride. The sensing may be performed by detecting an on-and-off pattern of light emitted from the object. In response, the gameplay system selects or modifies the interactive features of gameplay associated with the participant based on the identified augmenting object. For example, the interactive features are selected from memory by the gameplay system controller to match a character associated with the augmenting object during any interactive gameplay. This allows the gameplay participant to choose their abilities or powers for gameplay.”

At this time, it’s unclear if this technology could ever make its way to Walt Disney World Resort. As of now, it would stand to reason that this would be used in Avengers Campus at Disney California and Disneyland Paris. Currently, Disney World is under restrictions for what Marvel attractions it can bring into its Orlando location, due to a contract owned by Universal Orlando Resort.

WEB SLINGERS: A Spider-Man Adventure will be closing down for refurbishment in January with no definitive reopening date.

What do you think of this new technology we could potentially see in Disneyland? Let us know in the comments!