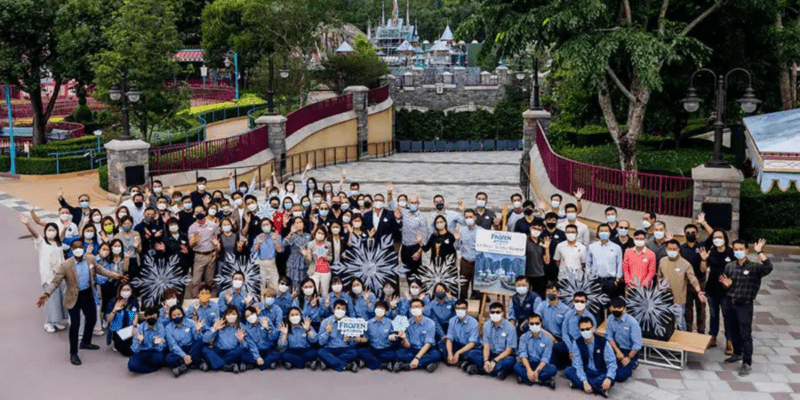 A select group of Disney Cast Members and Imagineers recently left their mark on one of the most anticipated projects coming to Disney Parks.

However, perhaps one of the most anticipated projects coming to Disney Parks worldwide is World of Frozen at Hong Kong Disneyland, which recently hit a historic construction milestone at the Hong Kong Disney Park, despite fans celebrating a massive removal from the land.

Per Disney Parks Blog, the group signed their names on pieces of “Ice Magic,” giant snowflakes that were placed on the Arendelle Castle, allowing Cast Members to become part of the new themed land’s — and Hong Kong Disneyland’s — history,

Issac Lam, Attraction Test and Adjust coordinator, commented, “Our team was very excited to join this iconic moment. It is truly memorable and meaningful for us to be part of a milestone of Hong Kong Disneyland Resort!”

Fanchi Chan, Attraction Test and Adjust coordinator, added, “I joined Park Operations in 2016 and moved to the World of Frozen Test and Adjust team this June, and today standing here having my name signed on the Ice Magic, I feel like I have grown up with this place.”

The Ice Magic pieces were inspired by the story of “Frozen,” where Elsa gains control of her magical abilities and uses Ice Magic to decorate areas throughout the land; some can be seen in the movies, while some are unique to the World of Frozen. Winter could not be more magical at Hong Kong Disneyland Resort this year. Now join us in watching the hours tick by until the next #FirstLookfromHKDL!

World of Frozen is scheduled to open in the second half of 2023, although no official date has been released. Inside the Magic will keep you updated as more information becomes available.

Are you excited about World of Frozen coming to Hong Kong Disneyland in 2023? Let us know in the comments below!