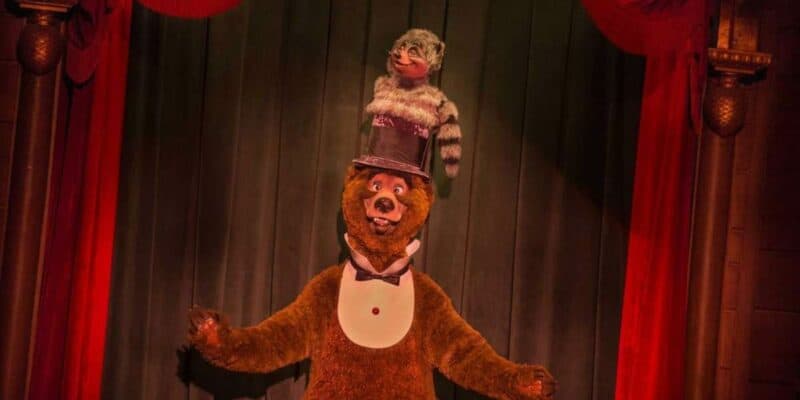 If you’re not familiar with Country Bear Jamboree, which can be found at Magic Kingdom, it is a country-and-western show that features 18 Audio-Animatronic singing bears who perform original and classic songs for about 16 minutes.

However, Guests have noticed recently that there is a rather distracting sound coming from some of the animatronics, as seen in this Reddit post from user FantasticMikey:

Country Bear Jamboree has always been one of my favorites – probably for nostalgia more than anything. But on my last few visits, the same thing has bothered me. The clicking from the eyes and mouths of the wall-mounted animals (Buff, Max and Melvin) are VERY loud and can be heard throughout the entire attraction – even over the music in the show.
The show music feels like it could be 30% louder, which may even solve this problem. Does anyone else notice this?

Other commenters did, in fact, notice. However, user worstdarkride pointed out that although the clicking might be bothersome, there is the issue of decibel levels:

They can’t have the audio too loud bc then it becomes an issue of potential hearing loss for CMs who have to be in there roughly an hour at a time. All attractions and maybe even some restaurants routinely have their decibels checked to make sure they’re at safe levels for cast and guests.

I noticed this on other attractions too, Voyage of the little mermaid, the big scary fish (can’t remember the technical name, it’s chasing Marlin) in The Seas with Nemo and others. I think you run the risk of music being too loud, and tbh would rather hear the noises than be deafened by music

However, user timerover didn’t seem as bothered by the clicking sounds:

I honestly love the clicking haha I’m weird. Animatronics are my favorite thing to see at any park, so getting to hear them and draw attention to their function really makes it fun for me personally.

Some commenters agreed that this sound was distracting and parts of the show were indecipherable, while others hadn’t noticed it before the original poster pointed it out. Others mentioned other attractions where this occurs, such as Walt Disney’s Enchanted Tiki Room.

Have you ever noticed this audio issue on Country Bear Jamboree or other attractions at the Disney Parks? Share your thoughts below!