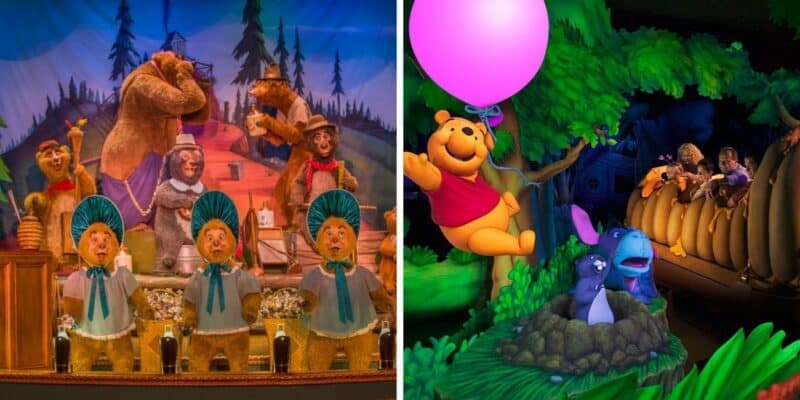 The Country Bear Jamboree attraction, formerly located at Disneyland and can now be found at Disney World, is considered controversial to some, especially when it comes to some of the song lyrics and stereotypes the audio-animatronics give off.

Well, despite this ride being considered controversial, did you know that some of the animatronics can actually be found in another Disneyland ride?

The Country Bear Jamboree was located at Disneyland in California for quite some time, but it closed in 2001 as it was replaced with The Many Adventures of Winnie the Pooh.

However, the Country Bears live on inside The Many Adventures of Winnie the Pooh. When riding through the heffalumps and woozles section of the ride, if you look up at the right time, you can see Melvin, Buff, and Max, who were the three living mounted animal heads found at Country Bear Jamboree.

You can spot them in this TikTok video.

The Country Bear Jamboree attraction is considered controversial to some, especially when it comes to some of the song lyrics and stereotypes the audio-animatronics give off.

The song lyrics aren’t the only things to be considered outdated. There is also certain dialogue that the bears say that can be considered offensive to some as well as the animatronics being pretty old (and a bit creepy).

Did you know that Melvin, Buff, and Max are inside The Many Adventures of Winnie the Pooh? Let us know in the comments below.