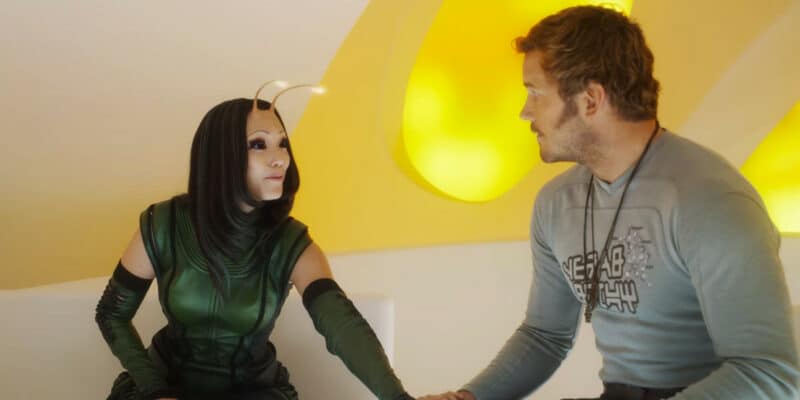 With James Gunn’s Guardians of the Galaxy: Holiday Special (2022) coming out this week, the news surrounding the Guardians has been swirling. Accordingly, the Disney+ show, Marvel Studios: Legends (2022) just added two new episodes centered on Drax (Dave Bautista) and Mantis (Pom Klementieff) which just revealed something Marvel fans have long theorized, but has not yet been confirmed, until today, and if theories are correct, it may also reveal a plot point to the upcoming Holiday Special.

Audiences first met Mantis (Klementieff) as part of the Marvel Cinematic Universe in Guardians of the Galaxy: Vol. 2 (2017) as a servant to Ego (Kurt Russel), the father of Peter Quill (Chris Pratt). Eventually, it’s revealed that Ego (Russel) has been fathering children across the galaxy in order to further his own power, and proceeds to try to use Quill (Pratt) as a sort of battery. With Mantis (Klementieff) help, Ego(Russel) is defeated, and the group continues on their way, bringing her along as a new addition to the team.

As part of the latest episode of Marvel Studios: Legends (2022), a deleted scene from Guardians: Vol. 2 showed an interaction between Drax (Bautista) and Mantis (Klementieff) discussing a secret Mantis has been keeping from Quill (Pratt). With his trademark candor, the very literal Drax (Bautista) tells his new friend that Quill (Pratt) should know that she is his sister. She demurs, insisting that their relation comes from his “source of greatest shame”, and so, at least for the time being, she’ll leave it alone.

This little scene proves that, as many have hypothesized, Mantis (Klementieff) is indeed Star-Lord’s (Pratt) half-sister, through Ego (Russel). The introduction in Legends may very well point to this news being revealed in a more meaningful way, especially with the Holiday Special being released later this week. Could the reveal of their familial relationship be Mantis (Klementieff) ultimate gift to a depressed Star-Lord (Pratt)? Audiences will just have to tune in and see!

What do you think about Mantis and Star-Lord’s Connection? Let us know in the comments below!