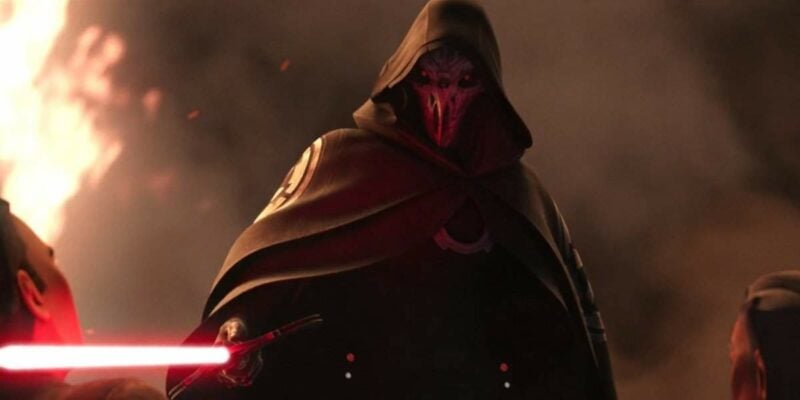 In the final episode of Tales of the Jedi, Ahsoka (Ashley Eckstein) must rejoin the fight after the Empire’s agents find her in hiding…

We open on Padmé’s funeral on Naboo, with crowds lining the roads to see her procession. On one side, Senators Bail Organa (Phil LaMarr) and Mon Mothma sombrely watch on. On the other, hidden in the crowd, a cloaked Ahsoka watches too. Afterward, Bail meets with the one-time Padawan. He tells her she shouldn’t have come, but she replies that she was her friend. She had to be here. Bail gives Ahsoka a communicator and asks her to stay in touch if she needs help.

We cut to Ahsoka in hiding on a pastoral world. She is working under the guise of ‘Ashla’ among farm laborers, and two — a brother and sister (Bryton James and Dana Davis) — are arguing. The brother leaves to get his lunch break after overstacked their cart. It almost collapses on the sister, until Ahsoka intervenes with the Force to save her. There is a moment of recognition.

Later, ‘Ashla’ is asked to eat with the laborers by the girl she saved. They are discussing the Empire. The brother supports them for the security they bring, even though another farmer says it is peace through persecution. The sister says their safety isn’t down to the Empire, looking at Ashla. The brother seems to pick up that there could be a Jedi among them: This is confirmed when he waves off Ashla and his sister on their transport trip by saying “May the Force be with you”.

The pair return to find the farmers’ village in flames. The brother reported Ahsoka to the Empire, and an Inquisitor (Clancy Brown), wearing a skull mask, has descended to find the fugitive. Only the brother and another farmer remain, the rest slain or up in flames like their homes. The Inquisitor believes the brother lied in his tip-off, until Ahsoka declares herself. The brother demands a reward for his information and is about to be killed by the Inquisitor until Ahsoka uses the Force to rescue him. The dark side wielder recognizes Ahsoka and says she is supposed to be dead.

In a short confrontation, Ahsoka disarms the Inquisitor and kills him. The sister approaches her brother, who is full of shame. Ahsoka tells them they are going to have to leave. Cut to Bail Organa delivering a shuttle to take them off-world, and asking Ahsoka if she is ready to rejoin the fight — things have only got worse since she left it. She looks determined.

Comments Off on Recap: ‘Tales of the Jedi’ Episode 6 “Resolve”