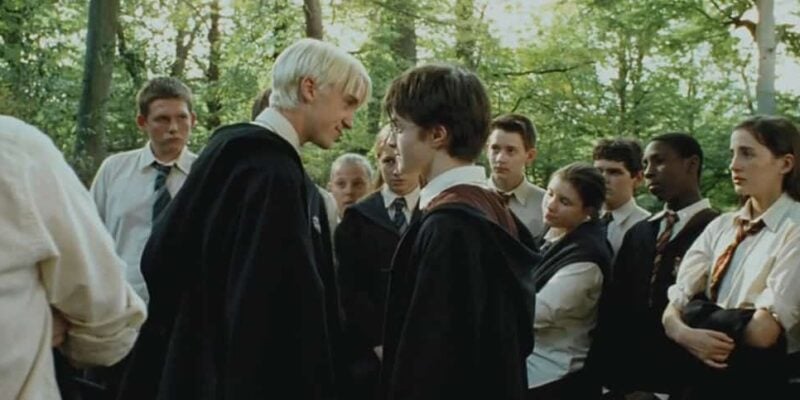 Is it too early to say Harry Potter actor Daniel Radcliffe is done with the franchise?

Because it seems like the actor who brought the Boy Who Lived to life is absolutely willing to distance himself from the franchise’s creator (and her loudly controversial views), while the actor who was once Draco Malfoy seems to be entirely down to return to the Wizarding World.

After author JK Rowling voiced her extremely controversial opinion regarding trans people (if you didn’t already know, she’s pretty strongly anti-trans rights) and labeled a TERF (Trans Exclusionary Radical Feminist) — the internet, and consequently the Harry Potter fandom — all but erupted into chaos. It’s created a schism of sorts within the Wizarding World franchise as a result, with actors clearly on either side of the fence or straddling an awkward middle-ground, or simply refusing to comment fully on the growing discourse.

Lucius Malfoy actor Jason Isaacs has stood by Rowling, while big stars Emma Watson (Hermione Granger) and Daniel Radcliffe (Harry Potter) have explicitly condemned her stance, while others have politely stepped around the topic, or expressed a non-committal, PR-approved sentiment.

This has put the Harry Potter franchise in murky waters — its current standing within Warner Brothers (now Warner Bros. Discovery, post-merger), has fluctuated. Once a shining beacon of family-friendly, wholesome magic and millennial nostalgia, Harry Potter now maintains a rocky reputation, with many fans denouncing the author and franchise altogether, remaining undecided or now uncomfortable with partaking in anything related to the series, or simply choosing to ignore the controversy. Boycotts surrounding Harry Potter projects are now common — the most recent of which being the allegations of anti-Semitism within the next installment in the franchise, Hogwarts Legacy.

JK Rowling’s very vocal position (a lot of her current tweets are around this topic) ensures that further division continues, not just within the creators and actors tied to the Harry Potter projects but those who would previously have openly enjoyed the magical series, no holds barred. All of this clearly casts a problematic spell over the entire franchise.

Because on top of all that, rumors abound with talk of Warner Bros. not being too happy with the Harry Potter film franchise and its most recent outings, Fantastic Beasts: The Crimes of Grindelwald (2018) and Fantastic Beasts: The Secrets of Dumbledore (2022), with support potentially drying up after lackluster box office and critical responses, leading to a potential reboot of the series on the horizon.

It’s along this vein that British actor Tom Felton, who played Draco Malfoy in the Harry Potter movies, has spoken out about his future with the series.

In a conversation with Josh Horowitz of the Happy Sad Confused podcast, Felton replies to Horowitz’s question about potentially returning to the franchise in his previous role, particularly within a Harry Potter and the Cursed Child project, where his character Draco Malfoy plays a fairly pivotal role — and Felton says that “he would definitely consider it”.

Expanding on this, Horowitz put forward the idea of Daniel Radcliffe and Emma Watson returning as their characters in a Cursed Child show, that if Felton were to join, all the rest of the film cast would have to, too:

I don’t know — I don’t think it will an “all or nothing” thing. I think, I hope that honestly, if they do continue to make more um, films or TV shows in the Wizarding World, I’d be happy to like, pop up as a, as an extra in the background. I don’t have to — as much as I’d love to play Draco, uh or, Malfoy again, I’d still just love to be part of the world, that would be cool enough.

On top of this, Felton admits to having a Slytherin House phone case for his phone, plus fondly recalls the time he went to see the Cursed Child play in London and felt so moved seeing little kids dressed in Harry Potter garb that he texted Chris Columbus, director for Harry Potter and the Sorcerer’s Stone (2001) and Harry Potter and the Chamber of Secrets (2002) in awe. All of this makes it clear that Felton, despite previously being “forbidden” from speaking about “She Who Must Not Be Named”, while reiterating his “pro-choice, pro-discussion, pro-human rights across the board, and pro-love” stance and claiming that JK Rowling was not particularly involved with the Harry Potter films. In contrast, Daniel Radcliffe seems ready to distance himself from things, doubling down on his position opposing Harry Potter author JK Rowling.

In an interview with IndieWire, Harry Potter actor Daniel Radcliffe makes it clear that he does not agree with Rowling’s anti-trans sentiment, distancing himself from others “in the franchise”:

The reason I was felt very, very much as though I needed to say something when I did was because, particularly since finishing ‘Potter,’ I’ve met so many queer and trans kids and young people who had a huge amount of identification with Potter on that. And so seeing them hurt on that day I was like, I wanted them to know that not everybody in the franchise felt that way. And that was really important.

Radcliffe’s equally-vocal-to-Rowling position puts him squarely at odds with the franchise creator. Despite both Felton and Radcliffe turning up and seemingly enjoying themselves at the Harry Potter 20th Anniversary: Return to Hogwarts (2022) (that JK Rowling decidedly did not attend), and both actors clearly understanding and appreciating what Harry Potter did for their lives and careers, it’s clear that both actors take a fairly different approach to the controversy muddying their childhood roles.

While Tom Felton clearly feels a lot of love and nostalgia that he continues to represent in Wizarding World swag, instead distancing the creator from the experience he had, Daniel Radcliffe is not against distancing himself from the creator — and in turn potentially wiping any chance of a “return” to the franchise, if JK Rowling has anything to say about it.

What do you think of the actors’ stance? Would you be interested to see them returning for a new Harry Potter project? Share your thoughts in the comments below!