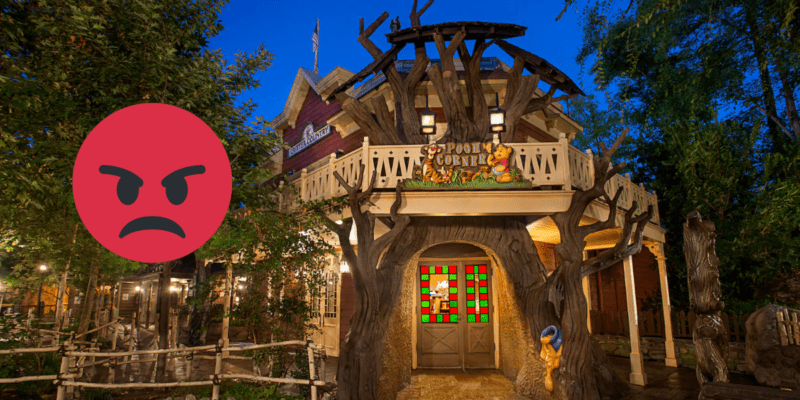 Now, a Disney Park Guest isn’t disappointed by the quality of the available merchandise but by the selection. Reddit user u/thechadc94 visited Disneyland Park this week and stopped in Pooh Corner, a store by The Many Adventures of Winnie the Pooh.

The Guest was hoping for a souvenir from their favorite ride but was left empty-handed. “Unfortunately there were no items specifically related to the many adventures of Winnie the Pooh. Not one. Serious disappointment.”

This isn’t the first time Guests have complained about the lack of on-theme merchandise at Disneyland Resort. In September, fans were outraged when it was revealed that a store by Pirates of the Caribbean was unknowingly selling controversial Duck Dynasty merchandise.

Pooh Corner does offer items themed after the beloved Hundred Acre Wood crew, just not The Many of Adventures of Winnie the Pooh ride, specifically. The official Disneyland Resort description of the Critter Country shop reads:

Dip inside this hunny pot of a spot, where a candy kitchen awaits you, along with the finest merchandise from the Hundred-Acre Wood.

More on The Many Adventures of Winnie the Pooh

Buzz through Hundred-Acre Wood in an oversized beehive and revisit beloved songs and scenes from Winnie the Pooh.

Get lost in the pages of A.A. Milne’s classic tales as you glide through Pooh’s most memorable adventures. Board your beehive and get swept up in a gust of wind with Piglet, Gopher, Eeyore, Kanga and Roo. Band together with Tigger and friends to stay afloat in a torrential downpour.

Celebrate sunny days and togetherness as Pooh finally gets his paws on some honey. This visual extravaganza filled with classic Disney songs is sure to delight cubs of all ages!

Inspired by the Disney Classic

Based on the stories by A.A. Milne, the Disney film was released in 1977 and included songs written by Disney Legends, the Sherman Brothers.

Have you noticed a lack of merchandise theming at Disneyland Park and Disney California Adventure?