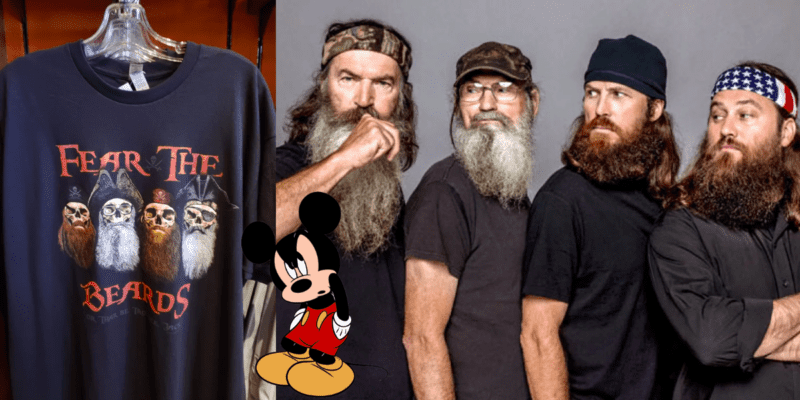 However, fans are furious after Reddit user u/Scotcash shared a photo of a tee shirt on sale at Pieces of Eight:

Why is Pieces of Eight at Disneyland peddling pieces of trash? from Disneyland

Many Disney Parks Guests have taken issue with the quality and variety of merchandise recently, but this tee shirt upset Disney fans for a different reason. Though it might look like a generic Pirates of the Caribbean shirt, it’s inspired by the Robertson men – starts of Duck Dynasty.

Duck Dynasty aired for eleven seasons but was canceled in 2017 after one of the stars, Phil Robertson, called homosexuality a sin and compared it to Beastiality. The once-beloved family man also said Black people were happy in pre-Civil Rights era America.

Some comments suggested contacting the Disney Park to ask that the merchandise be removed. Others called the Robertson family “bigots” and accused Disneyland Resort of backtracking on tolerance for the LGBTQIA+ community.

Others provided a more straightforward explanation. u/vahdude pointed out that the tee is one of many basic pirate-inspired shirts available on JoeBlow, a wholesale retailer.

“I’m guessing supply chain issues and they were just buying up anything with pirates on them to fill shelves and whoever bought them for the store didn’t know what it was Duck Dynasty,” u/AbeRumHamLincoln replied. “I saw them there like a month ago, so probably aren’t moving a whole lot of them.”

“I’m more offended by pirates being such an easy ride to make cool merch out of, and instead we get this lame stuff. So much wasted potential in that store,” u/Rhymesbeatsandsprite said.

Do you think Disneyland Resort should stop selling the Duck Dynasty shirt?