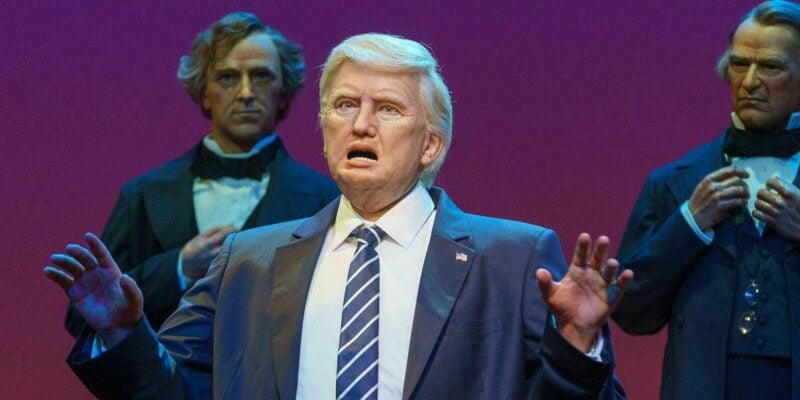 When visiting Walt Disney World, what exactly first comes to mind? Fast rides like Expedition Everest, Guardians of the Galaxy: Cosmic Rewind, and Rock ‘n’ Roller Coaster? Creepy dark rides like Haunted Mansion? Maybe even the iconic Cinderella Castle found at the center of Magic Kingdom? All of these are good answers and are what most people first think of when planning a Disney trip.

American history, on the other hand, may not even cross your mind when visiting the Disney Parks.

It may be surprising, but there is a lot of history to be immersed in at Walt Disney World, especially at the Magic Kingdom. From the historic Walt Disney World Railroad to the quaint Columbia Harbour House, there is so much American history represented in the Park.

While it may come as a surprise to some, American history is a crucial part of the Disney Parks. Walt Disney had a fascination with history as well as the future. This was a key component of the original idea behind EPCOT.

To bring things back to Magic Kingdom, by far, the most educational attraction has to be Hall of Presidents. Walt first created Great Moments with Mr. Lincoln for Disneyland and then had the idea to expand that idea at Walt Disney World Resort with The Hall of Presidents. The show was Walt’s idea, which is exciting as it is an attraction he thought up that Guests can only enjoy at Magic Kingdom. However, Walt passed away before his vision came to life.

When Walt passed, Roy Disney, Walt’s brother, took charge of keeping the Disney legacy alive and growing, and he remembered how much Walt loved the idea of having The Hall of Presidents at Magic Kingdom. Because of this, Roy decided that he was going to make sure that his idea would come to life.

Complaints have been growing about rowdy the crowds can be during this attraction, especially at the parts where former President Donald Trump stands up.

One Guest went so far to share their experience online with other members of the Walt Disney World community. The Guest introduced themselves as “a Brit who loves the hall of presidents.” The Guest goes on to describe their experience in the attraction recently. “Everything was as normal right until Donald Trump was called when at that point several audience members started hollering and cheering in the most cringe-worthy, brash and undignified way in comparison to the tone of the actual show.”

The Guest also claims that audience members asked the ones making noise to shush, only aggravating them even more. Things got testy during Biden’s introduction. “It was so disappointing to see people behave in a provocative and aggressive manner in what is essentially a theme park for children.”

This is something we have seen quite often at the show, unfortunately.

Of course, Disney encourages its Guests to remain seated and not to interrupt any of its live entertainment offerings. The Hall of Presidents has been a pretty hot topic in the Disney Parks community since the 2016 election. In fact, Disney fans did not hold back voicing their opinions regarding Disney’s Hall of Presidents attraction as Disney closed the attraction to make way for a new animatronic showcasing President Donald Trump.

Have you ever had a bad experience during this attraction?