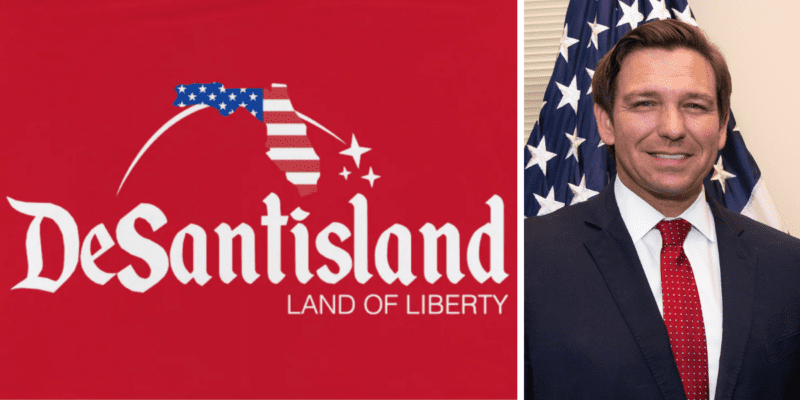 Florida Governor Ron DeSantis is up for reelection on November 8, 2022, battling against Democrat Charlie Crist. Supporters of the Republican incumbent are ramping up his campaign ahead of Election Day, including a conservative-owned shop called Patriot Depot.

Patriot Depot boasts of selling “supplies for the conservative revolution.” This election season, those supplies include an unusual DeSantis flag using Disney-inspired imagery:

The logo is available on flags, water bottles, tee shirts, lawn signs, and more. Social media users were quick to point out the hypocrisy of the design. @OhNoSheTwitnt wrote:

DeSantis supporters who literally live in Florida are so ignorant that they’re using a DISNEYLAND, which is located IN CALIFORNIA, logo rather than Disney WORLD which is located in… wait for it… FLORIDA.

DeSantis supporters who literally live in Florida are so ignorant that they’re using a DISNEYLAND, which is located IN CALIFORNIA, logo rather than Disney WORLD which is located in… wait for it… FLORIDA. pic.twitter.com/zNejLzSNZK

Not only does the flag reference the Disneyland Resort logo – located in California – rather than Florida’s Walt Disney World Resort, but it’s also quite ironic given the fierce ongoing battle between DeSantis and The Walt Disney Company.

In February, DeSantis announced the Parental Rights in Education Act, which “prohibits any instruction about sexuality or gender between kindergarten and third grade, or in a manner that is not age-appropriate or developmentally appropriate for students in accordance with state standards,” according to NPR.

Fans and Disney Cast Members led protests around the country after public records revealed that Disney had donated to many politicians who sponsored the bill. Disney released a statement on March 3 but didn’t directly mention the “Don’t Say Gay” bill. Fans asked Disney CEO Bob Chapek to directly condemn the anti-LGBTQIA+ legislation, and Pixar staff wrote The Walt Disney Company a letter asking the company to take a stronger stance against the bill. Chapek then called DeSantis to tell him that Disney did not support the bill. Disney also promised to pause political donations in Florida after donating $4.8 million to Florida campaign funds in 2020.

DeSantis responded by introducing and passing legislation to dissolve the Reedy Creek Improvement District, which has allowed Walt Disney World Resort to operate private municipal services since 1967. Despite lawsuits, DeSantis will likely appoint a committee to manage the district.

Governor DeSantis has not yet used this design. Disney has yet to issue a copyright violation for the use of its imagery.

What do you think of this DeSantis advertisement?