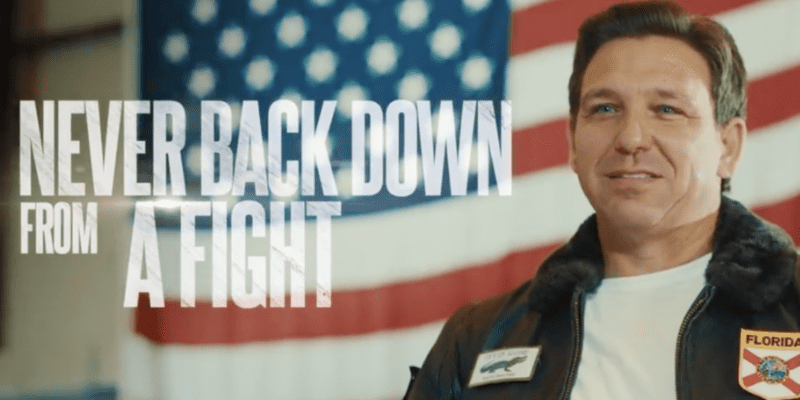 Rules of Engagement are as Follows:

“Good morning, ladies and gentlemen; this is your governor speaking—today’s training evolution: dog fighting, taking on the corporate media. The rules of engagement are as follows. Number one: don’t fire unless fired upon. But when they fire, you fire back with overwhelming force,” Gov. DeSantis says, dressed similarly to Lt. Pete Mitchell (Tom Cruise).

Clips of DeSantis firing back at reporters discussing the Parental Rights in Education Act – colloquially known as the “Don’t Say Gay” law – are interspersed throughout the ad. His son, Mason DeSantis, is also featured.

“Number two: never ever back down from a fight,” DeSantis says. “Number three: don’t accept their narrative.”

The ad urging supporters to “never ever back down” premiered just days after DeSantis asked a Florida judge to dismiss a second lawsuit filed by Orlando-area residents concerned about the impact of DeSantis dissolving Disney’s Reedy Creek Improvement District. In the motion, DeSantis’s legal team suggested that since the dissolution is not yet official, the plaintiffs cannot possibly know any tax implications and thus have no grounds to sue:

Yet, no tax increase related to SB 4-C has been proposed or imposed on plaintiffs. Their complaint utterly fails to identify sufficient ultimate facts showing how the potential dissolution of the Reedy Creek Improvement District pursuant to state law — assuming such dissolution were to occur — could plausibly infringe on their rights as taxpayers.”

Some have interpreted the statement, “assuming such dissolution were to occur,” as a hint that the Reedy Creek dissolution may not happen and that DeSantis may be “backing down” ahead of Election Day this November. Others say it’s a legal strategy to poke holes in the lawsuit. If all goes as planned, Reedy Creek will be replaced in 2023.

DeSantis warned Disney to stay out of the “Don’t Say Gay” controversy. The Walt Disney Company CEO Bob Chapek responded by pausing political donations and publicly denouncing the Parental Rights in Education Act after Disney fans and Cast Members demanded action. DeSantis stayed true to his word and immediately introduced what many considered retaliatory legislation to dissolve Disney’s Reedy Creek Improvement District, which has allowed Walt Disney World Resort to operate its own municipal services since 1967.

William Sanchez, attorney for the plaintiffs, believes this lawsuit has firm footing. In an interview with the Orlando Business Journal, Sanchez said:

Inside the Magic will report any updates in the lawsuit against Governor Ron DeSantis.