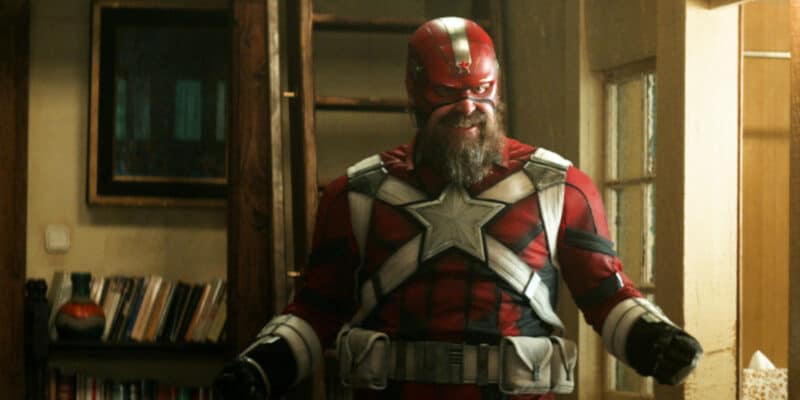 Red Guardian returns to the MCU with a few surprises for Thunderbolts (2024)!

The hero of the former Soviet Union, and surrogate father to both Natasha Romanoff (Scarlett Johansson) and Yelena Belova (Florence Pugh) first appeared in live-action in Black Widow (2021) and provided some much-needed comic relief in a film that had the potential to be one of the darkest in the Marvel Cinematic Universe. While we haven’t seen him since then, Red Guardian has been teased as part of the mysterious team being put together by Valentina Allegra de Fontaine (Julia Louis-Dreyfus), the Thunderbolts.

Not much in the way of detail has been given about the new film, but with exciting post-credits scenes, the return of Bucky (Sebastian Stan), Yelena (Pugh), and announcements like Harrison Ford joining the cast, Marvel fans certainly have a lot to look forward to! David Harbour took to the Phase Zero podcast to unpack his latest film, Violent Night (2022), in which he plays a vengeful and violent Santa Claus. After the initial conversation about the film, the commentary turned to Harbour’s involvement in the MCU, particularly about the upcoming phase 5 film, Thunderbolts.

“We’re like, you know, the losers.” said Harbour, speaking of the lineup, “There’s a lot of drama in a bunch of people who just keep getting their lives wrong — because of character flaws, keep messing things up”.

He also talked about how, because of these flaws audiences might be able to relate to these characters a little more, explaining how people like Captain America and Iron Man get put on a pedestal, but, that’s definitely not going to be the case with this team.

Harbour went on to say that something significant was going to happen in Thunderbolts, “It’ll be funny. It’ll be weird. It’ll be action.” And then the Stranger Things star added:

“…and then there is a bomb drop thing we add to the universe, which will be very exciting for the movie to do at the end of this particular phase that we’re ending.”

What this “bomb” is yet to be disclosed, and Harbour himself has yet to read the script, but does know the story, and the arc of the characters. If his words are anything to go by it will be an interesting end to Marvel Phase Five, setting up the end of the Multiverse Saga and the launch of Phase Six with Fantastic Four (2025), Avengers: The Kang Dynasty (2025), and Avengers: Secret Wars (2026).

What “bomb” will the Thunderbolts drop in their film? Let us know your thoughts in the comments below!