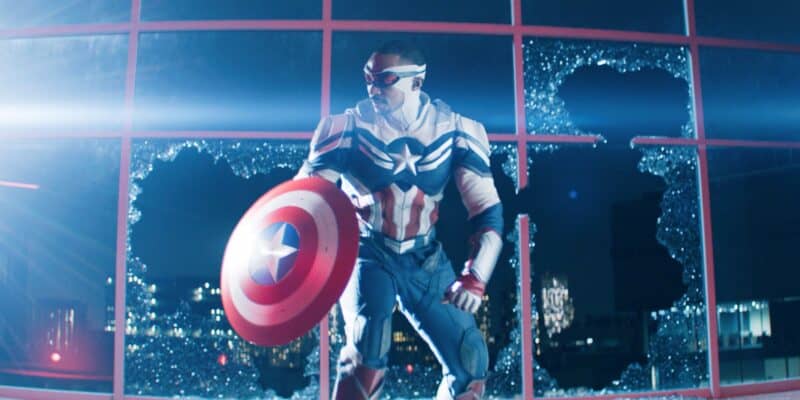 The new Captain America isn’t happy that he’s been left out of the Marvel Cinematic Universe’s Phase Five finale, Thunderbolts!

Anthony Mackie’s known for playing the role of Sam Wilson / Falcon, a close friend to Chris Evans’ Steve Rogers / Captain America in Marvel Studios’ Marvel Cinematic Universe. The character of Sam Wilson is a former United States Air Force pararescue airman who got ahold of some experimental military metal wings that enable him to fly in combat, earning him the name ‘Falcon. Sam Wilson himself debuted back in 2014 with Captain America: The Winter Soldier — remember the “on your left” scene, where Steve Rogers consistently overtakes Sam Wilson as they run laps around the Washington Monument?

Now, the actor for Sam Wilson, Anthony Mackie is speaking up about how he feels regarding the new Thunderbolts casting announcement (full coverage of the “MCU villains squad” announcement can be viewed here) that was officially confirmed at this year’s D23 Expo — The Walt Disney Company’s very own fan and expo event that happens every two years.

Sam Wilson was most recently in the Disney+ Original miniseries Falcon and the Winter Soldier (2021), where he starred in the lead role as the Falcon alongside Sebastian Stan’s Bucky Barnes / Winter Soldier / White Wolf. Together, they navigate the loss of their friend Steve Rogers after the events of Avengers: Endgame (2019), as they form tentative working relationships with Helmut Zemo better known as Baron Zemo (Daniel Brühl) in order to deal with looming terror threats and a worldwide pandemic.

After Sam Wilson was handed the mantle of new Captain America, there seemed to arise a new challenger to the title — an “evil Captain America” in the form of John Walker (Wyatt Russell — who all but begged to be put into Marvel’s Thunderbolts), who eventually took on the moniker US Agent after being disgraced. Returning to the Captain America-adjacent property were James “Rhodey” Rhodes (Don Cheadle) and Peggy Carter (Hayley Atwell) Sharon Carter (Emily VanCamp) and Ayo (Florence Kasumba), a member of Wakandan all-female special forces the Dora Milaje.

On the horizon for Mackie is “Captain America 4”, Captain America: New World Order, announced at this year’s San Diego Comic Con (SDCC), slated for May 3, 2024. The fourth instalment in the Captain America franchise will see Mackie’s Sam Wilson filling the shoes of Steve Rogers as the titular hero, having seemingly earned the title in Falcon and the Winter Soldier.

Now, in an interview with Variety at this weekend’s D23 Expo, Mackie speaks about his “upset” at being “left out” of the new Thunderbolts lineup — as Sebastian Stan’s Bucky Barnes appears to star opposite Florence Pugh’s Yelena Belova and importantly, Wyatt Russell’s “evil” Captain America, US Agent:

#CaptainAmerica star Anthony Mackie on whether Steve Rogers will make another appearance: “I’m highly upset that they put Sebastian in a movie with Wyatt and left me out. If Sebastian gets Wyatt, I should get Chris.” #D23Expo https://bit.ly/3RBHM6H

#CaptainAmerica star Anthony Mackie on whether Steve Rogers will make another appearance: "I'm highly upset that they put Sebastian in a movie with Wyatt and left me out. If Sebastian gets Wyatt, I should get Chris." #D23Expo https://t.co/x3kjWeb7zb pic.twitter.com/iCMK6qJQen

Mackie seems to be jokingly upset that his previous Falcon and the Winter Soldier co-star Sebastian Stan will be teaming up with Wyatt Russell in the upcoming Thunderbolts movie, even stating in the video on the likelihood of his buddy Chris Evans’ Steve Rogers reappearing in the franchise:

I hope so, man. You know, Chris is my boy. We all love and enjoy Chris.

So it really seems that Mackie is a hundred percent down should the powers-that-be at Marvel Studios (AKA Kevin Feige and Co.) decide that they want to bring Chris Evans back in some capacity to the Marvel Cinematic Universe Superhero Franchise.

Anything could happen now, and it’s all up to the team over at Marvel Studios!

Where do you think Anthony Mackie’s Sam Wilson is headed in the MCU? Leave your thoughts in the comments below!