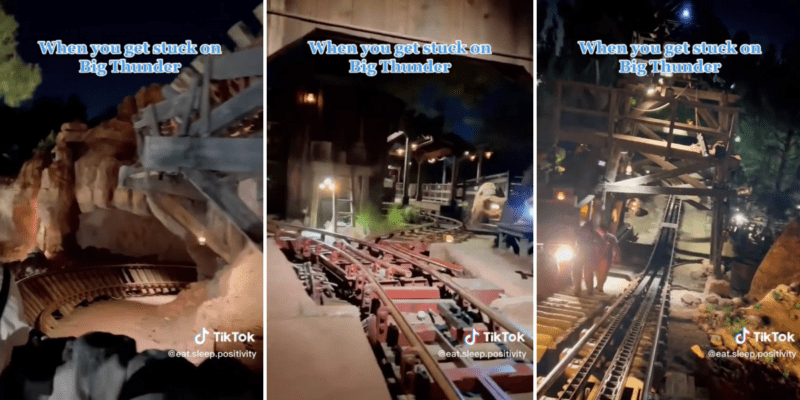 A group of Guests could take an up-close look at the tracks of Big Thunder Mountain after being evacuated from the iconic Disney attraction.

As crowds continue to reach new highs since Disneyland Resort reopened in 2021, it seems like the California theme park continues to face constant issues with its most popular attractions, with frequent breakdowns, malfunctions, evacuations, and general trouble with the Park’s upkeeping.

One of the most recent incidents occurred at Big Thunder Mountain in Frontierland at Disneyland Park after the wildest ride in the wilderness came to a complete stop, leaving Guests stranded in one of the attraction’s lifts. A video of the incident was posted on TikTok by Jose & Baileigh (@eat.sleep.positivity), who shared a few snippets of their experience during the evacuation, including up-close looks at the tracks and a few looks behind the scenes of the popular attraction.

The couple didn’t share any comments on the process other than using an emoji in their caption, referring to being mindblown by the experience. They also didn’t share the exact number of evacuated Guests during this breakdown. However, considering that Big Thunder Mountain trains consist of five cars able to carry about six Guests each, it wouldn’t be farfetched to assume that nearly 30 Guests went through the evacuation process along with Jose and Baileigh.

You can see Jose & Baileigh’s video below or click here to watch it.

There’s no doubt that this behind-the-scenes look at Big Thunder Mountain is an experience Guests will hardly forget, especially considering that they got to explore the wildest ride in the wilderness at night, which is definitely a sight to behold.

Related: Indiana Jones Ride Breaks Down…Again, “Someone Come Get Me”

Have you visited Disneyland Resort recently? What was your experience like? Tell us about it in the comments below!