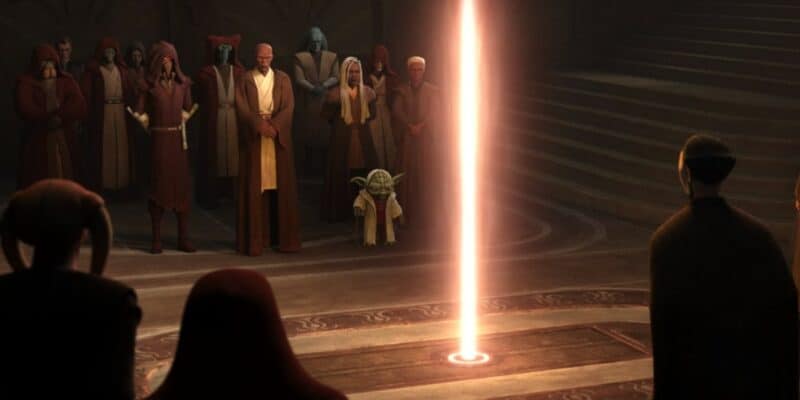 This is the second episode of Star Wars: Tales of the Jedi following the man who will be known as Count Dooku. Let’s discover another story from the history of this future villain…

A Jedi shuttle coasts in to land on the planet of Raxus Secundus. Inside are Jedi Masters Dooku (Corey Burton) and Mace Windu (TC Carson), arriving to retrieve the body of Jedi Master Katri who died in an ambush targeting the planet’s senator. The pair are working together, but their approaches are very different: Windu wants to play things by the book; a stickler for rules and follows the Jedi Council’s mandate. Dooku senses something is off about the death and wants to investigate further, beyond their simple directive.

After speaking to Senator Larik (Theo Rossi), who survived the attack, Dooku pushes to see the place where it happened. The group travel to an isolated grove, despite Windu’s plea for them to take the notion the senator is hiding something back to the council first.

At the crime scene, Dooku inspects blaster scorching and saber flashing, asking how many attackers there were. The senator says Master Katri was set upon as soon as they began to depart the ship, but the ship bears no signs of damage. Dooku says it is unusual for a Jedi to succumb to a surprise attack unless it is from someone they otherwise would trust. He ignites his lightsaber.

The senator confesses that it was their own guards who killed Master Katri and is immediately shot by those flanking him. Droids leap from the trees and set upon the Jedi. They are eliminated by the skilled Masters quickly, who confront the guards on their motivation.

“You and all of the senate’s puppets will see a reckoning,” one of the guards says. They tell the Jedi the senator was part of a group exploiting their positions to become rich by selling off the planet’s resources. They were holding him captive in an effort to push their own agenda, saying they couldn’t approach the Jedi as they are lapdogs of the Senate who only protect the rich and powerful. It appears to resonate with Dooku, while Windu insists Katri would have listened.

In the cells, Dooku is speaking with one of the imprisoned guards. He tells him he had a point, and while he cannot condone his methods, he believes he did right to try and protect his planet. Speaking to Windu afterward, he says he believes the Jedi Council will be happy they have solved the case. He asks whether he thinks the Jedi Order would continue to keep the peace if the Senate did not have the rule of law. “We are guided by the Council, not politics or ego,” Windu says.

Jedi Master Yoda, Ki-Adi-Mundi (Brian George) and others are present at Master Katri’s funeral on Coruscant. Their body is lowered into the ground and a beam of light emits from the subterranean chamber. After the service, Dooku is speaking to Windu once again. Mace tells him he has been offered Katri’s seat on the council. Dooku asks if Mace knew before the mission that the opportunity was available. He insists he didn’t, but would talk to the council on Dooku’s behalf. Dooku looks unconvinced.

Comments Off on Recap: ‘Tales of the Jedi’ Episode 3 “Choices”