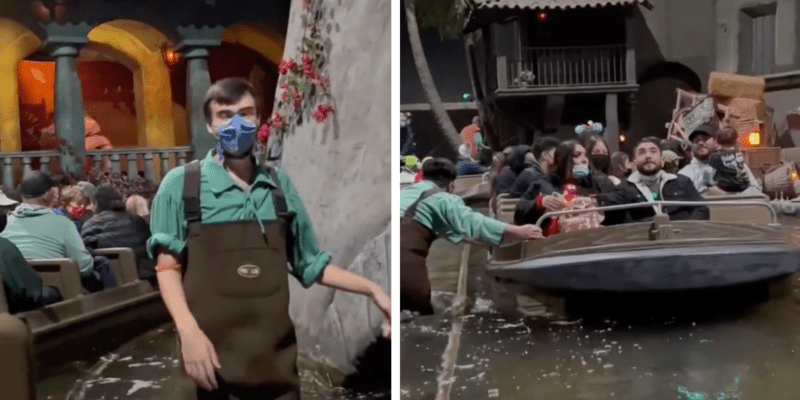 Ride breakdowns are typical at Disneyland Park and Disney California Adventure – it’s bound to happen when thousands of Guests are boarding each ride every day. Typically, issues are resolved within minutes. But sometimes, Guests must be evacuated.

Seeing backstage areas is a dream for many Disney Parks fans, but it quickly became a nightmare for some Disneyland Resort Guests this week. Dozens of Guests were stuck on Pirates of the Caribbean in New Orleans Square for two hours before Cast Members came to the rescue. @eat.sleep.positivity documented the experience on TikTok:

We broke down on Pirates 😲 Was stuck there for 2 hours 😭 watch till the end to see how we got off!! #piratesofthecaribbean #disneyland #disneyparks #disneymagic #disneytiktok #distok #distokfam #disneyrides

In the video, a Cast Member wades through the water to manually push boats to a platform, where Disney Security Cast Members help pull visibly relieved Guests off the boats. The Guests didn’t say if they were given Lightning Lanes or any compensation for their experience.

Thankfully, it seems no one was injured during this evacuation. Pirates of the Caribbean is back in operation at the time of this article’s publication.

Have you ever been evacuated at a Disney Park?