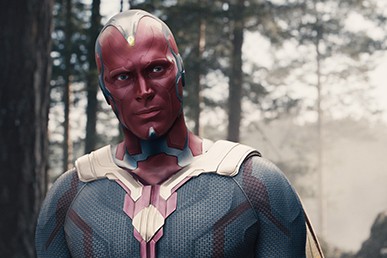 Earlier today, reports of a Vision series were officially confirmed with some new details about what to expect with Paul Bettany’s Vision.

WandaVision allowed Paul Bettany and Elizabeth Olsen to explore their relationship, which was mostly offscreen in the MCU. This helped fans see a different side of both characters as fans learned how important family is to Wanda and fans got to see Vision deal with being dead but somehow existing in Wanda’s Hex reality.

This led White Vision to fly away and fans have been waiting to see where his story will go. According to Deadline, Vision will be trying to regain his humanity and more of his memories in the series with a tease that Elizabeth Olsen might reprise her role as Wanda Maximoff/Scarlet Witch:

‘VISION QUEST’ will follow The Vision trying to regain his memory and humanity. Jac Schaeffer will oversee the series. There is also possibility for Elizabeth Olsen to appear as Wanda.

‘VISION QUEST’ will follow The Vision trying to regain his memory and humanity. Jac Schaeffer will oversee the series.

There is also possibility for Elizabeth Olsen to appear as Wanda.

Jac Schaeffer will also oversee the project as he is for Agatha Harkness: Coven Of Chaos, meaning that Schaeffer will have his own weird WandaVision universe inside the MCU. This isn’t bad, as WandaVision is still considered one of the best MCU series that tells a wildly different story than most MCU movies.

With Elizabeth Olsen potentially having a role in the series, this could be very interesting as fans have wondered what Olsen will do next. After her villainous portrayal in Doctor Strange in the Multiverse of Madness (2022), fans would be happy to see Wanda find her true love again, and this could lead to Marvel creating a new version of House of M where Wanda completely goes mad after losing Vision a second time after the X-Men are part of the MCU.

This will help fans see both sides of the character and allow her to potentially team up with the X-Men as her new people once mutants are more common in the MCU. This could be an interesting new chapter for both characters, but Marvel is only getting started with the project as they will begin writing the script next week.

It will still take a while for the series to appear on Disney+, but that doesn’t mean White Vision couldn’t appear in other MCU projects, like Armor Wars. Don Cheadle’s new MCU movie was speculated by many fans to be the perfect project to bring Vision back into the MCU, and it could still happen.

What are your thoughts on Vision getting his own series? Let us know what you think!

Comments Off on Marvel Officially Creating a ‘Vision’ Project, Might Include Elizabeth Olsen’s Scarlet Witch