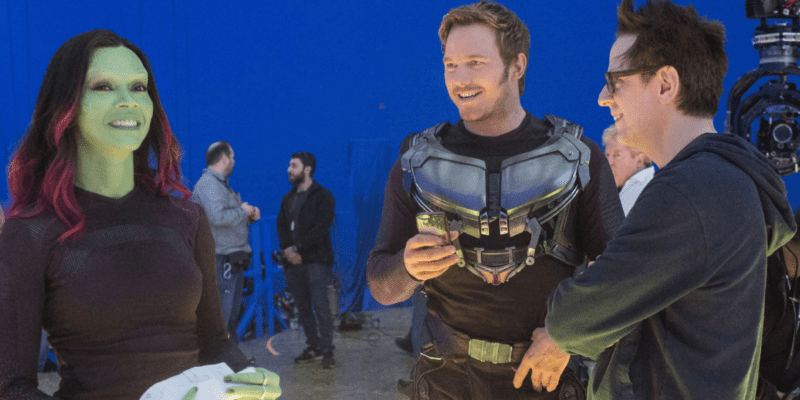 Things are shaking up in the Marvel Cinematic Universe and the DC Universe! Despite heading the MCU’s The Guardians of the Galaxy Holiday Special, which premieres on Disney+ on November 25, James Gunn is headed to DC Studios.

A breaking report from The Hollywood Reporter on Tuesday afternoon revealed that James Gunn and Peter Safran would take over as co-CEOs and co-chairs of DC Studios after Walter Hamada left last week. The pair will lead the film, TV, and animation divisions and report to Warner Bros. Discovery CEO David Zaslav.

According to The Hollywood Reporter, Gunn will focus on the creative side of DC Studios, while Safran will concentrate on the business and production side. The deal will last four years, and Gunn is contractually exclusive to DC Studios, leaving no room for future Marvel projects.

“DC has among the most entertaining, powerful, and iconic characters in the world and I am thrilled to have the singular and complementary talents of James and Peter joining our world-class team and overseeing the creative direction of the storied DC Universe. Their decades of experience in filmmaking, close ties to the creative community, and proven track record thrilling superhero fans around the globe make them uniquely qualified to develop a long-term strategy across film, TV, and animation, and take this iconic franchise to the next level of creative storytelling.”

Accurate. So pleased to be here. #DC

Accurate. So pleased to be here. #DC pic.twitter.com/KpvdME4Pju

In a statement, the pair said they were “honored to be the stewards of these DC characters we’ve loved since we were children:”

“We look forward to collaborating with the most talented writers, directors, and actors in the world to create an integrated, multilayered universe that still allows for the individual expression of the artists involved. Our commitment to Superman, Batman, Wonder Woman, Aquaman, Harley Quinn, and the rest of the DC stable of characters is only equaled by our commitment to the wonder of human possibility these characters represent. We’re excited to invigorate the theatrical experience around the world as we tell some of the biggest, most beautiful, and grandest stories ever told.”

The director previously revealed that he was retiring from Marvel with the final Guardians film, along with Chris Pratt (Star-Lord/Peter Quill). Though Star-Lord recently made a cameo in Thor: Love and Thunder (2022), Gunn claimed that his retirement would mean the end of the Guardians of the Galaxy in the MCU. “Some stories have an end, doesn’t mean everyone dies,” Gunn said at San Diego Comic-Con.

What do you think of James Gunn and Peter Safran heading DC Studios?