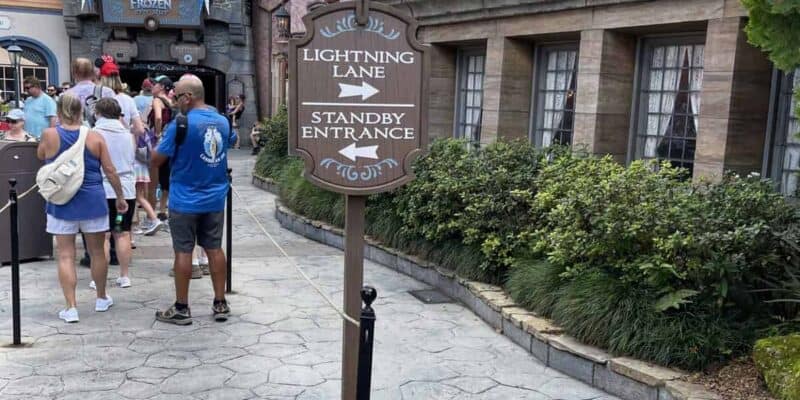 Many Guests have complained about Lightning Lanes, which increased in price yesterday. Some Guests who purchase Lightning Lane say they aren’t getting enough value for their money, sometimes waiting 30 to 45 minutes in “faster” queues. Still, some Guests say Disney is prioritizing Lightning Lane Guests too much.

@littlestbowshoppe visited the Disney Parks and became frustrated with how standby Guests are treated. She complained in a TikTok:

“Yeah, we notice,” the Guest remarked.

While many commenters pointed out that the formerly free system also prioritized FastPass+ Guests over standby Guests, this Disney fan stood firm. “I don’t remember them prioritizing FP in a 10 to 1 ratio…and everyone had equal chances to snag one or 2 a day. It wasn’t perfect, but this is worse,” she replied in a comment.

@tigerlily3232 agreed. “Completely agree I think fast passes can be nice but they’re not affordable and having to explain to your child why 10 other people got to go first…completely heartbreaking,” they wrote. “Not only do they get to break the rules and cut in line but it they also make the line a lot longer.”

“The way they do LL is so unfair. last trip I did both standby & LL and on tower they literally let like 20 people in LL go by with one standby family,” @jeoihi said.

But others who utilized Genie+ on Disney Parks vacations said the ratio makes sense. “I pay for my family of 4 to have genie plus for every day of our trip! I would be upset if I didn’t get to go faster then the standby,” @jakesmom01 wrote.

Have you noticed slow standby queues since Disney Genie+ and Lightning Lane were introduced at Disneyland Resort and Walt Disney World Resort?