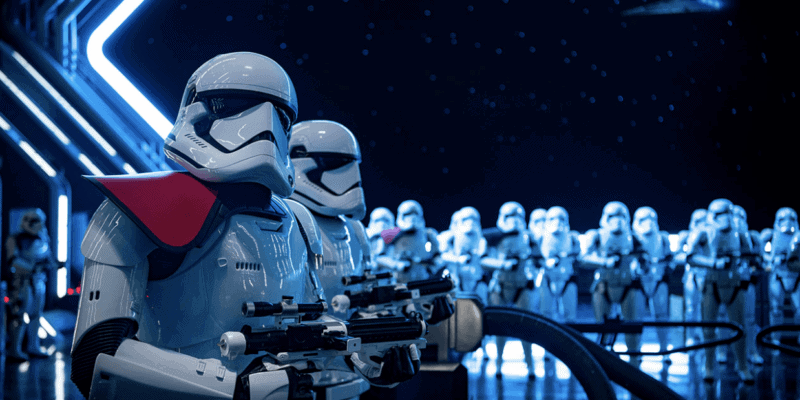 Star Wars: Rise of the Resistance was one of the most ambitious rides ever created at Walt Disney World Resort and Disneyland Resort.

Rise of the Resistance is a massive attraction with multiple ride systems that is unlike anything you’ve ever experienced at Walt Disney World Resort… or anywhere else in the galaxy! The ride is located in Star Wars: Galaxy’s Edge in Disney’s Hollywood Studios, right down from Millennium Falcon: Smuggler’s Run.

Because of its insane technology, it should come as no surprise that the attraction brings in a crowd– with noticeably large wait times– each day.

It has become one of the most popular selections for Individual Lightning Lane at Walt Disney World Resort, but it seems that the Lightning Lane may soon be outpricing what a family can afford when visiting a Disney Park.

Previously, Lightning Lane costs were set at $15.00 apiece. Today, Disney announced that it would be going to a “tiered system,” which would be based on crowd attendance.

Reporter Scott Gustin shared the news that Rise of the Resistance would now have a range of $15.00 to $22.00 for the month of October. In the case of a family of four, it could now cost $88.00 for one ride on the attraction if they choose to go in the Lightning Lane. A family of five will now pay $110.00.

Walt Disney World: With the Genie+ price increase, the price of *some* Individual Lightning Lanes will also adjust. Example: Rise of the Resistance price range for month of Oct. is now $15-$22. However – no change this month to the max price for Seven Dwarfs Mine Train ($11).

Walt Disney World: With the Genie+ price increase, the price of *some* Individual Lightning Lanes will also adjust.

Example: Rise of the Resistance price range for month of Oct. is now $15-$22. However – no change this month to the max price for Seven Dwarfs Mine Train ($11).

In addition to the news of the Genie+ tiered system, it was also announced today that WEB SLINGERS: A Spider-Man Adventure is now part of Disney Genie+ at Disney California Adventure in Disneyland Resort. The attraction had previously only been accessible through the Individual Lightning Lane.

What do you think of these Disney Genie+ and Lightning Lane changes?