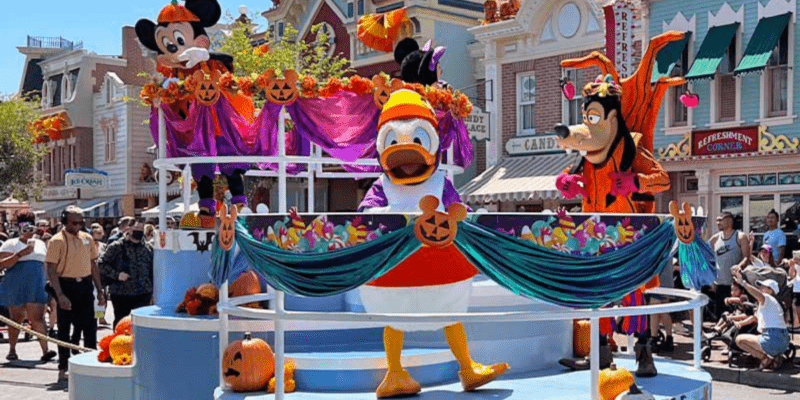 Nobody does Halloween like the Disney Parks! Guests can Trick or Treat down Main Street, U.S.A., at Mickey’s Not-So-Scary Halloween Party at Walt Disney World Resort and Oogie Boogie Bash at Disneyland Resort.

While not as terrifying as Halloween Horror Nights at Universal Orlando Resort and Universal Studios Hollywood, the Halloween season regularly sells out at Disneyland Park and Disney California Adventure.

However, some Guests say that the quality of Disney’s Halloween celebrations is decreasing. Reddit user u/shocktroop5811 shared a photo of a cavalcade float at Disneyland Park featuring Mickey Mouse, Donald Duck, Minnie Mouse, and Goofy in Halloween costumes:

Does anyone else think that this “float” looks cheap and was decorated by Party City? from Disneyland

The Guest complained that the float looked cheaply decorated, as if the Halloween fare had come from the American discount party chain, Party City. “This thing looks like it was decorated for a toddler’s birthday party,” they said.

A few commenters pointed out that the float has since been updated, as shown in this video from Theme Park Steve:

Still, many agreed that the float is underwhelming. “Chapek: we need you to decorate this Halloween float. Your budget is $6,” u/skylinr01 wrote.

One Disneyland Resort fan said the float is “not their best.” Another wrote that it’s “definitely lacking some magic.”

Many Guests said that since this float drives down Main Street, U.S.A., during the day and not during Oogie Boogie Bash, Disney Park Guests with day tickets should feel lucky they got any Halloween-themed entertainment.

Related: Rare Disney Villain and Characters Spotted at EPCOT Ahead of Spooky Season

One fan had a different perspective. Our favorite Disney characters debuted new Halloween costumes this year, which are supposed to look hand-crafted by the Fab Five. u/InstructionJunior457 said the float was meant to give the same impression:

It’s supposed to, because it’s “homemade” like their costumes this year

What do you think of this Disneyland Resort Halloween float?