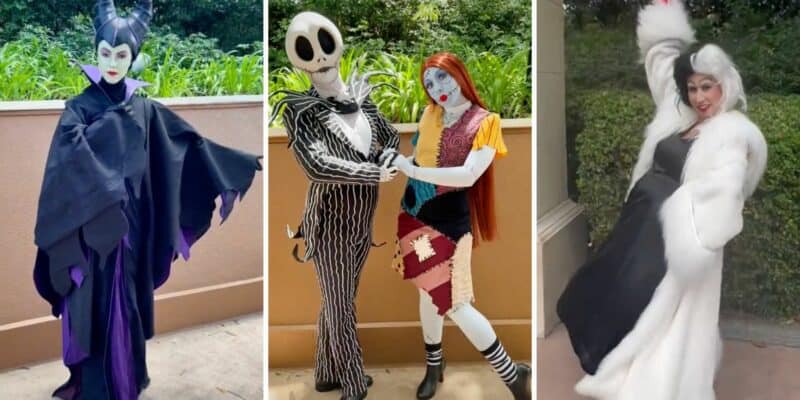 What do Maleficent, Jack Skellington, Sally, and Cruella de Vil all have in common? They’ve each been spotted making their rounds at Walt Disney World’s EPCOT over in the last week!

Maleficent was spotted by TikToker @alexanderfarnworth, who posted a video of the encounter:

In the clip, which you can see above or by clicking here, the Mistress of All Evil is seen gliding around the Parks, posing for photos, and interacting with Guests in her path. “Being able to meet her was a nice surprise,” the voice-over said.

Towards the end of the video, Nightmare Before Christmas (1993) stars Sally and Jack Skellington made an appearance. Jack in his iconic pin-striped suit and Sally in her patchwork dress, the couple chatted about Christmastown before posing together for a photo.

In another part of the park, Guests ran into Cruella de Vil. TikTok user Brady Cox posted a video of the villain treating the World Showcase like her own personal runway. The video (which can be seen below or by clicking here) is captioned:

Despite the heatwave, Cruella was sporting her classic fur coat. Not pictured is Dr. Facilier, who commenters claim was also out and about on that same day. The comment sections on both videos were filled with excitement and envy, as fans are thrilled to see villain activity once again in the parks.

One user speculated that the characters were testing their skills ahead of this Halloween season, as Disney is finally bringing back the beloved Mickey’s Not-So-Scary Halloween Party. Several party dates have already sold out thanks to Guests who are elated by its return.

On top of that, Disney Parks Blog released a fall Foodie Guide filled with themed menu items that promise to conjure up some Halloween spirit.

Additionally, this Halloween season brings with it a sequel that some fans feel is decades overdue. The Sanderson Sisters return to run amuck once again in Hocus Pocus 2, coming to Disney+ on September 30.

The evidence of evil lurking around EPCOT is just the start of what is sure to be an exciting spooky season at the Disney Parks.

Are you ready for Halloween at the Disney Parks? Comment below!