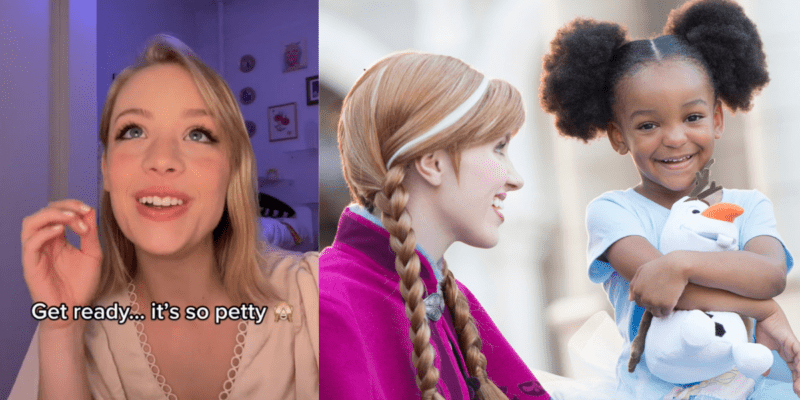 One of the most magical parts of any Disney Parks vacation is seeing your favorite Disney characters in person! From Mickey Mouse to The Mandalorian, hundreds of character performers bring beloved Disney stories to life.

Emma Dahlin, an actress and musician, worked for The Walt Disney Company for six years. She performed as almost every Disney Princess, including Ariel, Rapunzel, and Princess Anna from Frozen (2013). Dahlin shares stories from her time at Walt Disney World Resort on TikTok.

As much as she loved meeting Guests as a character performer, Dahlin said one thing “would get on [her] nerves so much.” Little girls would shyly reveal that they had the same name as Princess Anna but mispronounce it.

Dahlin noted that most kids were too little to understand the difference, and she “loved that they could see themselves in a character they look up to.” However, she was perplexed that many adults made the same mistake!

“The parents would come up to me and would say, ‘Go say hi to AN-uh and Eltsa’ with a T, Eltsa. They only say her name a billion times. It’s Anna, it’s not AN-uh. It was the only thing that felt weirdly personal,” Dahlin said.

Many commenters, both former Disney Princess performers and Disney Parks fans, sympathized. “It’s the smallest thing but it’s literally not her name 😂😂,” Dahlin replied to one.

Even some other Annas and Elsas chimed in! “[My] name is Anna and I always hate it when people are like ‘oH fRoM fRoZeN?!’ Like no…. Different pronunciation,” one wrote.

“My name is elsa and i can confirm people ALWAYS pronounce it ‘elt-zuh,’” another said.

Have you ever shared a funny moment with a Disney character performer?