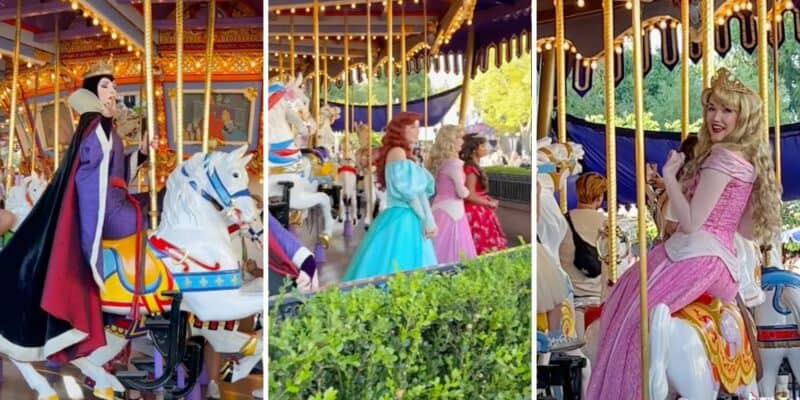 With the return of character meet and greets to the Disney parks, Guests are often searching for the best way to get up close with their favorites.

This can be achieved through character dining where characters grace tables with autographs and photo ops, through a traditional meet and greet queue that ends with one on one character time, through prime spots along daily parade routes, and sometimes, through surprise, random sightings around the parks.

This was the case for some fortunate Guests, who had a rare character encounter on a recent trip to Disneyland. TikToker @karen_inwonderland shared her “point of view” of the experience on social media.

♬ Send Me on My Way – Vibe Street

The clip opened with a view of Fantasyland’s King Arthur Carrousel as Guests were mounting their hand-painted horses. The shot pans to a regal Evil Queen from Disney’s Snow White and the Seven Dwarfs (1937) whipping her cape atop one of the chariots as she waited for the ride to begin amongst fellow riders.

And she wasn’t alone! Princess Aurora of Disney’s Sleeping Beauty (1959) also rode side-saddle for the attraction alongside Guests, smiling and waving to onlookers.

At the end of the clip, the two join Elena from Disney Channel’s Elena of Avalor (2016,) Ariel from the Disney classic The Little Mermaid (1989,) and Flynn Rider from Disney’s Tangled (2010) at the perimeter of the ride before exiting together and making their way back through the parks.

Commenters agreed that seeing characters “out and about” and riding attractions with Guests was uniquely special.

This attraction is one of the originals from Disneyland’s opening day in 1955. Carousels in general played a huge role in the inspiration of Disneyland, as Walt used to enjoy watching his daughters ride Griffith Park’s merry-go-round. Much of Walt’s park planning centered around this experience, according to Disneyland’s website.

The hand-painted horses are more than 90 years old and include some originals from the first ride design in the 1920s and some antiques that Walt acquired when he purchased and relocated the ride from Sunnyside Beach Park in Toronto, Canada to California.

Ride Like Fairytale Royalty
Make your way beneath a vibrant medieval tent in the castle courtyard and select one of 68 ornately carved, hand-painted horses—or take a seat in the fanciful chariot.

As classic Disney tunes play from the old-fashioned fairground organ, show off your horsemanship as your prancing pony glides up and down.

During the whimsical journey, relive the classic Disney animated fairytale Sleeping Beauty through a series of 9 hand-painted vignettes on the inner rounding board above the horses—and watch your own fairytale come to life!

Have you ever witnessed a character riding an attraction before? Tell us about your experience in the comments!