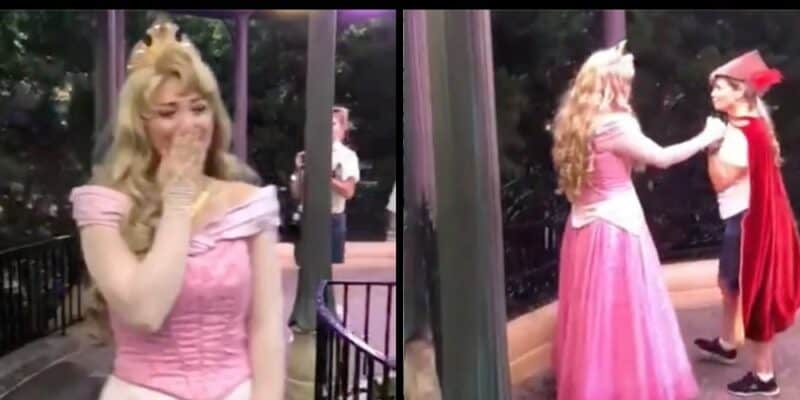 Princess Aurora was brought to tears by a magical surprise as she was visiting with Guests on her last day working full-time in EPCOT’s France.

A video posted to TikTok shared the sweet interaction and has topped 35,000 views to date:

♬ You’ll Be In My Heart (from “Tarzan”) – Piano Sunday

As seen in Walt Disney’s now preserved 16th animated feature film, fans might recall the character as it donned Prince Phillip’s attire and led Briar Rose in a woodland waltz.

Those visiting Disneyland in California can also catch a glimpse of the character’s statue just outside of Sleeping Beauty’s castle.

Per the comment section, it appears “Auntie Jo Jo” is actually team leader Joselyn, who commenters say cares deeply for many coworkers who have been on the receiving end of her “magic.”

One commenter called her an “amazing human and a true miracle in this world.” User @lmkrumm wrote, “Joselyn is one of my leaders and 100/10 human🥰🥰.”

Related: Guests Give Back to Cast Members With Surprise Lockers

But her Mr. Owl get-up was only the beginning of Joselyn’s surprise for the Princess.

♬ I Wonder (From “Sleeping Beauty”) – A Covering

“My best friend is everything to me,” the video subtitles read. “Thank you Jo Jo for all your love.”

Character meet and greets only just returned to the parks this spring after being suspended for years due to COVID-19 health and safety protocols.

As early as April 18, we will start reintroducing traditional character greetings at Disneyland and Walt Disney World Resorts, as well as aboard Disney Cruise Line. That’s right! Very soon, you will once again be able to hug Mickey Mouse, get an autograph from Mulan, and share a laugh with Goofy. We know many of you have missed these special moments, and your Disney character friends have missed you, too!

Through Character Dining, meet and greets, cavalcades, parades, performances, and more, Guests are able to interact with some of Disney’s most beloved characters just like these supporters did with Princess Aurora.

Who is your favorite character to see around the parks? Let us know in the comments below!