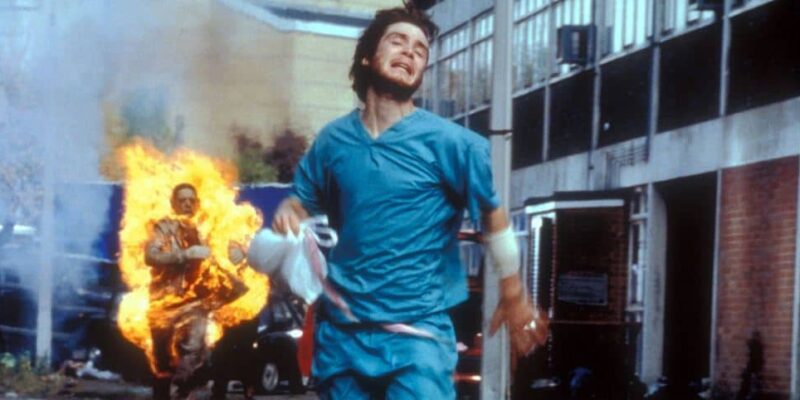 Disney+ might not be your immediate go-to when you’re thinking of watching a horror movie this Halloween. But don’t count the House Of Mouse’s streaming service out just yet: with the Star catalog bringing a wealth of 20th Century and Searchlight titles to the table, there’s plenty of boo for your buck on Disney+ this spooky szn. Check out our top five picks for your horror genre movie fix below.

Ready Or Not, here this movie comes. A black comedy horror, Ready Or Not sees newlywed Grace visit the home of her husband’s wealthy family the Le Domas’s. They made their money in board games and struck quite a deal to do so. The Devil said they could have their fortune… as long as they agree to play a killer party game every time one of them gets wed. What happens next is a deadly game of cat and mouse as Grace finds herself on the run from the 1%, the target of a murderous game of hide and seek.

Jet black humor, some memorable deaths, jump scares and an original premise — as well as a standout turn from Samara Weaving as Grace, and rom-com icon Andie MacDowell as the mother-in-law from hell — make this a worthy addition to your Halloween watchlist.

Look, we can argue until Jack Skellington pops out of the cauldron whether or not this is a Halloween movie or a Christmas classic. The genius of The Nightmare Before Christmas (even more so than its incredibly nippy runtime) is that it can be both. This stop-motion musical is packed with instantly iconic songs, led by an incredibly charismatic performance in the form of Danny Elfman’s Jack and Catherine O’Hara’s Sally.

Yes, his skeletal visage was long-associated with Hot Topic shoppers and emos, but for good reason: he cuts an instantly iconic figure, lending himself a natural choice to be the figurehead of this year’s Mickey’s-Not-So-Scary celebrations. And as for the rest, it all carries with it a distinctly Tim Burton vibe (fitting, as he produced it and wrote the original poem it is based on). And what’s more Halloween than Burton?

The Night House follows Rebecca Hall’s Beth, a widow returning to her lakeside home who begins to experience supernatural visions of her dead husband. When she finds plans for what appears to be an identical house to their own, on the other side of the lake, it leads her down a chilling path and on a journey of discovery: that the man she married might not be everything she thought.

A hidden horror gem, it plays with clever cinematography and production design to fill the house itself with scares around every corner. Any shadow, light fitting, or piece of furniture could be mistaken for an apparition, making for a particularly spooky watch.

28 Days Later is a classic, starting with an immediately chilling premise: Central London. I jest (sort of), but this now pillar of the zombie genre, directed by Danny Boyle, is something every self-respecting horror fan needs to have checked off their list. Widely credited with establishing the ‘fast zombie’ phenomenon, it follows Cillian Murphy’s Jim, who awakes from a coma into a world 28 days into a viral plague outbreak.

The most iconic scene is of him crossing Westminster Bridge and finding it totally deserted; but scarier than the isolation, or the speed running infected, is what the film has to say about humanity. It takes less than a month for society to go dog-eat-dog and in this post-pandemic world, it’s all too easy to imagine how quickly we could succumb to our worst instincts. Cheery food for thought!

We end on one of the newest additions to the library: Marvel Studios’ special presentation of Werewolf By Night. Directed by acclaimed composer Michael Giacchino, and boasting a cast that includes Gael Garcia Bernal (Jack Russell) and the iconic Harriet Sansom Harris (Verussa Bloodstone), it sees a group of monster hunters come together to see who will inherit the Bloodstone: a relic which grants the user protection against the worst the night has to throw at them.

As the title suggests, lycanthropy throws a furry spanner into the works of what should be a fairly straightforward contest — the first hunter to retrieve the stone from the hide of a monster hidden in a maze wins. A loving tribute to the classic Universal Monster movies, it plays out mostly in black-and-white, with splashes of red highlighting the stone’s power and the viscera that unfolds as the evening draws on. Prior Marvel Cinematic Universe knowledge is not needed: this is a great standalone supernatural romp and bitesize at less than an hour.

What will you be watching on Disney+ this Halloween? Let us know in the comments down below!