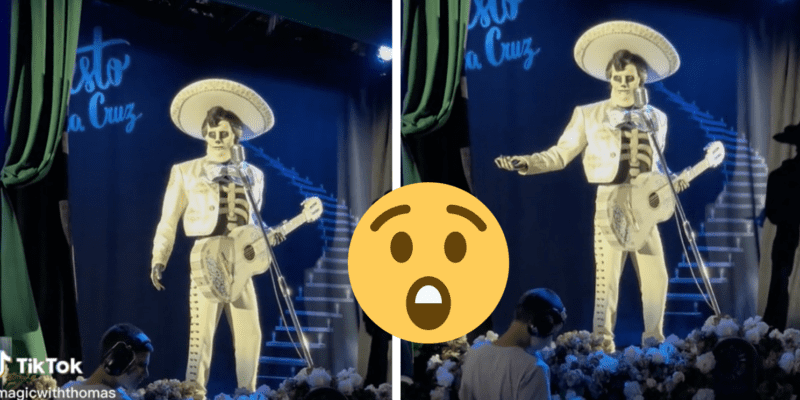 Oogie Boogie Bash is a not-so-scary celebration of all things Halloween at Disneyland Park and Disney California Adventure!

This year, the Disney Parks’ trick-or-treat trails are full of Disney villains, new and old. Returning favorites include Agatha Harkness from Marvel Studios’ WandaVision, Sid from Toy Story (1995), and Maleficent from Sleeping Beauty (1959). New arrivals include Mother Gothel from Tangled (2010), Madam Mim from Sword and the Stone (1963), and Ernesto de la Cruz from Pixar’s Coco (2017).

One Guest, @magicwiththomas on TikTok, shared the following video from an interaction with the impressive Ernesto de la Cruz:

In it, the villainous musician playfully mocks a Disney Cast Member because the white roses on his stage are dying. “Cathy, I told you to water the roses. What happened?” He asks.

“I left you a bucket in the back; did you not see it?” de la Cruz asks.

“I watered them,” Cathy exclaims.

“You did? Then why are half of them dying?” de la Cruz demands. “I don’t know,” Cathy says again.

Fans were delighted to see Ernesto de la Cruz at Oogie Boogie Bash this year, many in awe as the impressive Disney Cast Member debuted with a performance of “Remember Me” in incredibly realistic makeup. Though Disneyland Resort often sees more villains than Walt Disney World Resort, many hope the character will make his way to Mickey’s Not-So-Scary Halloween Party at Magic Kingdom Park next year!

Oogie Boogie Bash is an annual hard-ticketed event at Disneyland Park and Disney California Adventure on select nights during the Halloween Season. Though the event is sold out for this year, start planning your 2023 Disney Halloween Party now with this information from Disney:

Your ticket also lets you enjoy Disney California Adventure Park for up to 3 hours before Oogie Boogie Bash – A Disney Halloween Party begins. Once the party starts at 6:00 PM, you’ll be treated to 5 hours of shindig shenanigans—including special Halloween-themed entertainment, attractions, Character sightings and more.

So, whether you’re a poised princess, galactic defender or fearless hero, there’s something incredible for all. Choose a date from 24 exciting nights—as ticket availability is limited, be sure to get yours while supplies last!