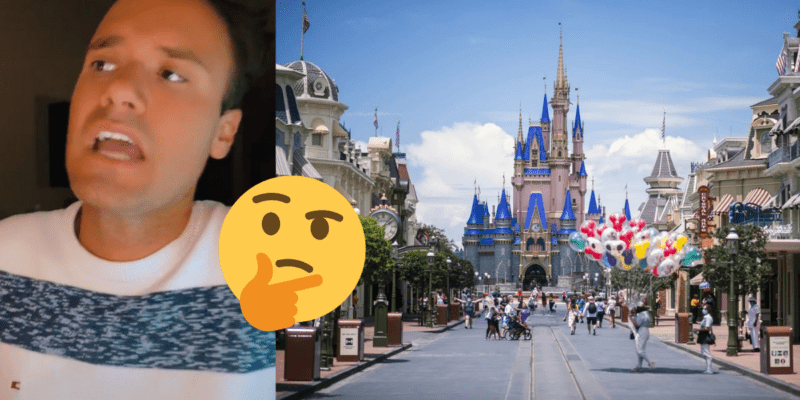 Now, some fans are hoping for an even stricter Disney dress code. It started with a TikTok from Grant Sherrod (@bgsherrod):

Sherrod says his point is for all Guests from around the world, but “mainly women.”

“This is a family Park. This is not Chip N Dales,” Sherrod explains. “If you gonna wear some white shorts or some white pants in the Florida heat, don’t wear colorful underwear. I saw a lady, and I tell you no lie, I can remember the cheetah print underwear and them white pants, and it scarred my brain. Like my brain is so scarred that I had to come home and get me a bottle of Grey Goose to recover. Like, why?”

He also says that women shouldn’t wear faux leather or leather pants. “I was having a hot flash just looking at your legs.”

“I get it. You go to Disney World. You want to have a cute outfit, and you want to look pretty,” Sherrod says. “It’s Florida in the f**king summer. You ain’t gonna look pretty. You’re gonna be sweating like a whore in church.”

“I think Disney world needs to come up with some type of clothing guideline that basically says what you can and cannot wear at certain times. Because I have seen too much,” Sherrod argues. “And I mean, I’m talking about older women now. And the granny panties and their thongs! Like if I see a 65 year old woman wearing a thong again, I will probably just gouge my eyeballs out.”

Sherrod claims he felt like he was at the “Chip N Dales experience.” “Magic Kingdom, you ain’t so magical,” he jokes.

Leaving an outfit home is best if you’re unsure about breaking Disney’s guidelines. From Disney:

What do you think about the Disney Parks dress code?