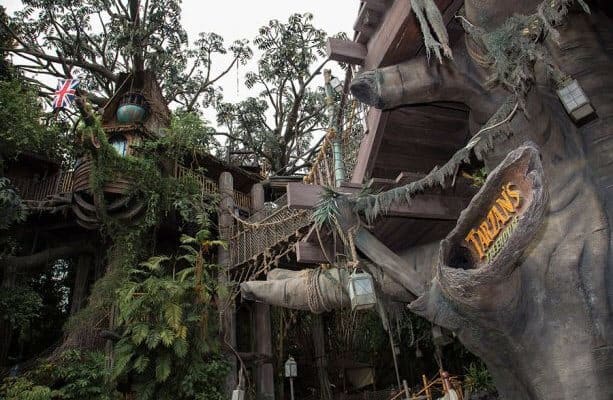 As we reported a few months ago, Disneyland announced that it would be closing Tarzan’s Treehouse in order to retheme the attraction. Over the last few weeks and months, we have seen parts of the attraction be completely dismantled and destroyed as a part of the project.

Tarzan’s Treehouse opened in 1999 to Disney Guests as a walk-through attraction which showcases the story of Tarzan with treehouse rooms that closely resembles those from salvaged parts from a shipwreck, according to the Disneyland attraction’s backstory. Before the attraction was Tarzan’s Treehouse, it was known as Swiss Family Treehouse, which opened to Disney guests in 1962, and featured concrete roots, steel limbs and 300,000 leaves.

For a long time, a tarp hung over the construction work as a way to hide what was being done. However, several Guests noticed this tarp was removed from the attraction recently.

Did I mention the tarp was off on Sunday?

Did I mention the tarp was off on Sunday? 👀 pic.twitter.com/cDsxMwLZQx

Another user replied, showing off what the attraction looks like at night when the lights are turned on:

Lights we’re on the other night which made it look cool pic.twitter.com/NRgZ7dPbC4

At this point, we still do not know what exactly will take over Tarzan’s Treehouse, as Disney has not made any official announcement regarding the overhaul.

Many have suspected that we will be seeing Encanto take over, but again, nothing has been confirmed.

What do you hope to see this attraction turn into?