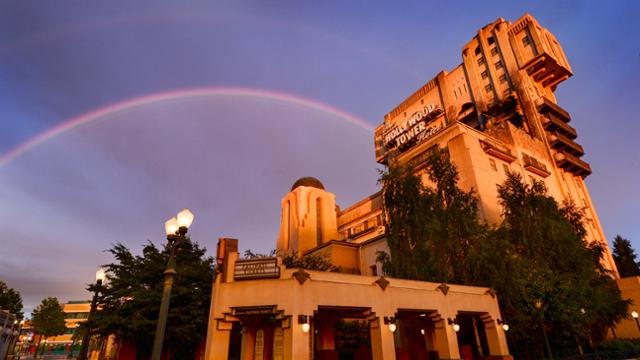 One of the most-talked about aspects of Disneyland Paris’ pride month was the introduction of gender-neutral bathrooms as well as an update to the iconic Tower of Terror attraction.

Pride events have been taking place at the Disney Parks for years. However, they’ve all been hosted “unofficially” by park Guests. Walt Disney World and Disneyland have both seen these Guests-run events, including the popular “Gay Days.”  Disneyland Paris has seen the unofficial “Magical Pride” celebration since 2014.
The very first official pride celebration took place back in 2019, and the event has increased in popularity ever since, so much so that Disneyland Paris has just announced the return of the event.
Disneyland Paris revealed that the special event will return on June 17, 2023. As for what to expect, Disneyland Paris states the following:

“Walt Disney Studios Park is THE place to celebrate diversity with family and friends! Magic fills the air, with live concerts, a colourful parade and attractions open ’til 2am. Get ready for the 2nd fabulous edition of Disneyland Paris Pride, brought to you in all the colours of the rainbow!”

It is important to mention that Disneyland Paris just welcomed its own version of Avengers Campus, something else that has also proven very popular among Guests.
When visiting Avengers Campus at Disneyland Paris, Guests are able to join forces with their favorite superheroes and help them in missions to protect the Earth. The land will be home to two attractions,  Spider-Man W.E.B. Adventure and Avengers Assemble: Flight Force, where Guests will be able to meet Iron Man as one of the most advanced animatronics in Disney Parks worldwide. Guests can also shop for all their superhero needs at the different stores and enjoy an Avenger-worthy meal at PYM Kitchen, Stark Factory, and the food trucks around the Campus.
Avengers Campus features two new attractions as well, in the form of Spider-Man W.E.B. Adventure and Avengers Assemble: Fight Force coaster, which replaced the Park’s version of Disney’s Rock ‘n’ Roller Coaster.
Have you been to Disneyland Paris?