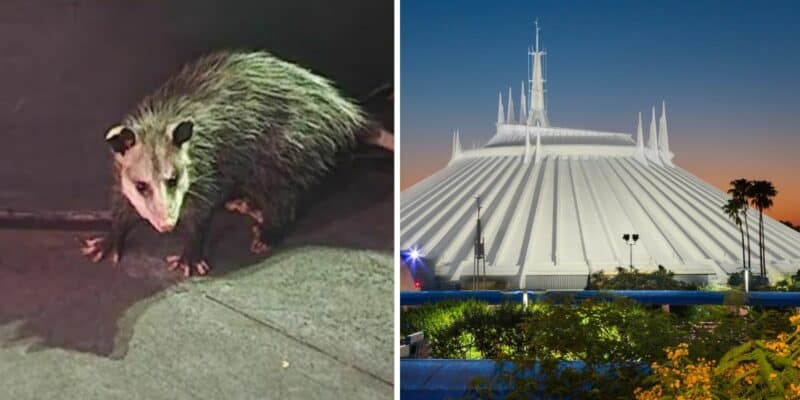 When visiting Walt Disney World in Orlando, Florida, so many great experiences await. From thrilling attractions like Big Thunder Mountain Railroad and Expedition Everest to newer rides like Star Wars: Rise of the Resistance and Avatar Flight of Passage, Guests are in for a wild time.

However, the Parks have been getting more “wild” lately, with Guests spotting wildlife throughout the Resort.

Because a large portion of the theme parks is outdoors, Guests may come across birds, geese, rabbits, cranes, squirrels, raccoons, snakes, and alligators. In the past, we have reported on a bird swooping down and onto a table at Disney’s Animal Kingdom, stealing their mac and cheese, as well as a squirrel stealing candy from a gift shop.

Recently, one Guest spotted a member of the marsupial family strolling through the Magic Kingdom and shared a photo that went viral on Reddit:

Discovered a friend by Space Mountain last night from WaltDisneyWorld

The animal was found at Tomorrowland near Space Mountain. While cute, it’s important for Guests to leave the wildlife alone.

Tomorrowland features many attractions and experiences, such as the previously mentioned Space Mountain, PeopleMover, Buzz Lightyear Space Ranger Spin, Walt Disney’s Carousel of Progress, and many more. Tomorrowland will soon be home to a brand new ride as well when TRON Lightcycle Run finally opens.

Ever since Walt Disney World Resort’s TRON coaster — officially called the TRON Lightcycle Run — was announced on July 15, 2017 at the D23 Expo in Anaheim, California, fans have been anxiously awaiting news regarding the thrill ride. The roller coaster was originally expected to open sometime during Walt Disney World Resort’s 50th-anniversary celebration, which began October 1, 2021 and will continue into 2023. However, thanks to this year’s Disney D23 expo, we can finally confirm that this roller coaster will be opening in “Spring of 2022”.

Have you ever spotted a wild animal at Disney?