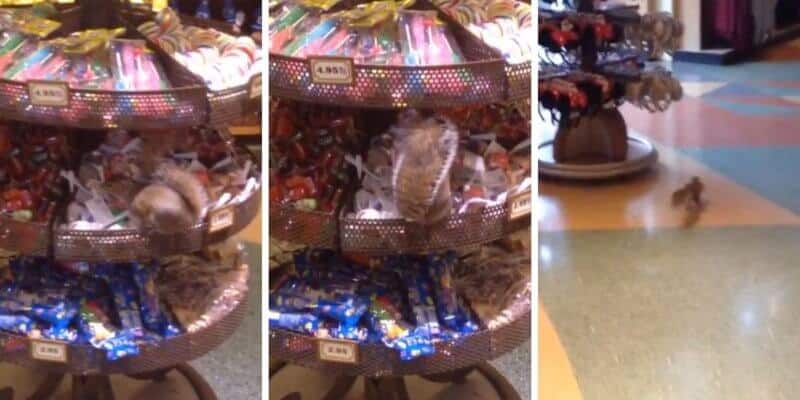 If you are a Guest at Walt Disney World, it’s no secret you will experience one-of-a-kind rides, see unique shows, spot some of your favorite Disney Characters, and more! But what you will also see is wildlife — and no, we aren’t talking about the animals at Disney’s Animal Kingdom.

Since the theme parks are located outdoors, Guests may come across birds, geese, rabbits, cranes, and, of course, squirrels. Now, Disney World has signs posted throughout the theme parks and Resort hotels to inform Guests not to pet or feed these wildlife animals as, they are, well, wildlife. They are not trained to interact with humans and are not household pets.

With all of this being said, because the wildlife is in constant contact with Guests, it is inevitable that certain animals will get a bit friendly.

We recently reported on a bird swooping down and onto a table at Disney’s Animal Kingdom, stealing their mac and cheese. Now, we are seeing another wildlife animal — a squirrel — going into one of the stores at Disney’s Hollywood Studios and stealing candy!

One Reddit user, whitshoespam, shared a video to the social media platform which shows a squirrel rummaging through the candy inside a Disney’s Hollywood Studios shop:

This squirrel stealing candy at HS always makes me smile. The manager said, “He’s isn’t supposed to do that!” ?❤️

This squirrel stealing candy at HS always makes me smile. The manager said, “He’s isn’t supposed to do that!” ?❤️ from WaltDisneyWorld

It seems as though the furry bandit decided on a Mickey lollipop before scurrying out of the store (good choice!)

Though this video is quite cute, and even a bit hilarious, it is important to remember that if you see a wildlife animal, such as a squirrel, inside one of Disney World’s theme parks, please do not touch or feed the animal. As we mentioned earlier, Disney posts warning signs throughout the theme parks, and they’re doing so for a reason.

Do you have a crazy wildlife animal story that happened at Disney World? Let us know in the comments below.