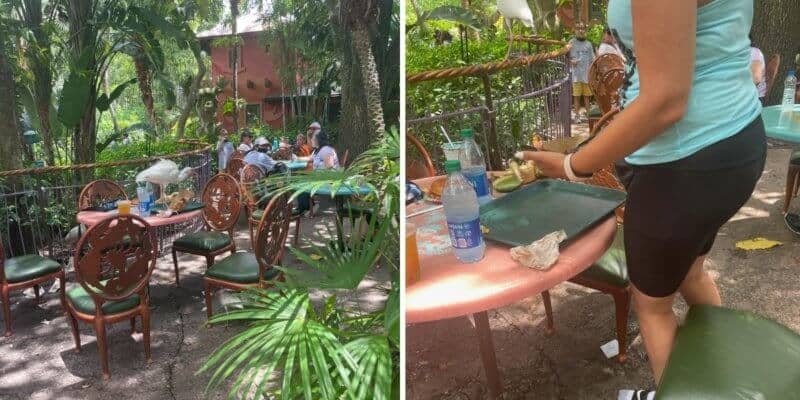 When Guests visit Disney World, they will surely see other humans when they visit the theme parks and other creatures that get to visit the Most Magical Place on Earth for free — and get to eat just as well as paying customers!

No matter what theme park you go to, whether it be Magic Kingdom, EPCOT, or Disney’s Hollywood Studios, Guests are bound to see the occasional “Disney duck” or bunny enjoying the sights and sounds of Disney. Still, Disney’s Animal Kingdom definitely wins the trophy for most animals in a theme park.

Not only are there hundreds of animals on their reserve, but plenty of birds make their way through the Park every day. Considering how Animal Kingdom has a lot of outdoor seating when it comes to dining locations, if you ever want to see a swarm of birds — Flame Tree Barbecue is the place to do it.

The popular Quick-Service location can be found shortly after entering the Park and has tasty barbecue options for Guests with a huge outdoor seating section. On our last visit to Animal Kingdom, we watched one of the birds swoop right into a table full of people actively eating and straight into one Guest’s pulled pork mac and cheese!

Instantly, everyone at the table jumped away from the bird, who didn’t seem to mind the attention now that the full meal was available. The bird ate around a quarter of the food before a Cast Member stepped in to shoo it away. The Cast Member offered to bring a new meal out to the table and noted to be aware of the birds, as this was the 9th meal that the birds did this too — just within the hour!

Considering the theme parks at Disney World are outdoors, several creatures basically live at Disney. And these animals are near Guests every single day, so they do not seem to not be intimidated by humans! If a bird is ever approaching your table, be sure to cover up that food to avoid a potential winged takeover.

Have you ever had a bird steal your food at Disney World? Let us know in the comments below.