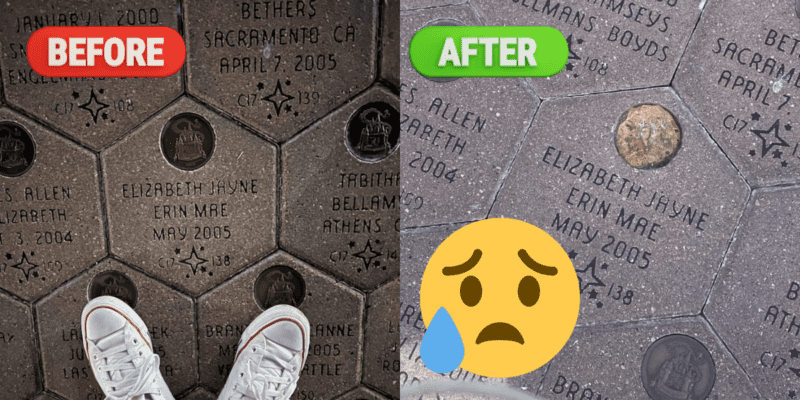 In the early 2000s, Disneyland Resort allowed Guests to become a permanent part of the Disney Parks with an engraved brick celebrating Disneyland Park’s 50th Anniversary.

Now-Disney influencer Liz (@chimchimchurro) and her family purchased one, engraved with their names and the year 2005. On September 17, Liz shared a memory of visiting the brick with Chairman of Disney Parks and Resorts Josh D’Amaro:

One year ago today Josh visited my brick with me and we took a pic of our Disney shoes together.

One year ago today Josh visited my brick with me and we took a pic of our Disney shoes together. pic.twitter.com/5dnPYq4Uw8

One day later, on September 18, Liz announced that her brick had been defaced – the 50th medallion had been stolen. She spoke about the heartbreaking situation on TikTok:

“I don’t even want to post this video because I don’t want to give the person that did this the satisfaction of knowing how upset I am,” Liz said. “I’m so sad. Why would you do that? That’s so mean.”

In the comments, Liz said that Disneyland Resort could not replace the medallion as they’re no longer manufactured. But she thanked everyone for the kind words and said their “thoughtfulness means a lot. 🤍🤍”

On Twitter, Liz said that a friend had visited the brick just a day prior, and it was intact, so she knew someone had recently defaced it. Additionally, she noted commenters have often threatened to steal the medallion, but she never thought anyone would do it:

My friend visited last night and it was there. So it happened today. I feel like I’m going to throw up.

I get mean comments all the time that say they’re going to steal it but I hoped no one actually would. 😭😭😭

I get mean comments all the time that say they're going to steal it but I hoped no one actually would. 😭😭😭

Liz hasn’t mentioned being in touch with Disneyland Resort, though many commenters suggested asking to review security footage. Others said that though the timing is highly suspect, it’s possible that the glue came loose when the Disney Park is power washed each night and a Disney Cast Member removed the medallion.

The medallion may turn up at Disneyland Guest Services or Lost & Found. Many Walt Disney World Resort fans were similarly devastated when memorial bricks and Leave a Legacy plaques were removed at Magic Kingdom and EPCOT due to construction.

Does your family have a brick at Disneyland or Walt Disney World Resort?