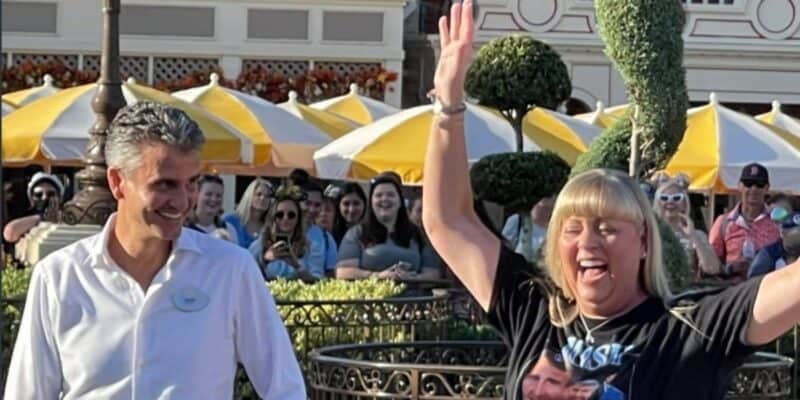 How big of Disney fan are you? Can you name any Park Presidents or perhaps Executive officers of The Walt Disney Company? For one Magic Kingdom Guest today, Disney Parks, Experiences and Products Chairman  Josh D’Amaro, was a meet and greet she had to get and she was prepared to make a statement with a Josh D’Amaro t-shirt!

Disney Parks fanatic and personality Diane Watkins arrived at Magic Kingdom Park at Walt Disney World Resort for the anniversary of a lifetime! Ready to celebrate the “Most Magical Celebration on Earth,” Watkins arrived at the theme park wearing a very special shirt in case she ran into Disney Parks, Experiences and Products Chairman Josh D’Amaro.

Often visiting the Parks and saying hello to waving Guests, D’Amaro has become fairly well known by Disney Parks fans. Occasionally, he’ll stop for a photo or help the Disney Parks Blog promote a new activation. Today was no different, as this morning nearest to Cinderella Castle Hub, D’Amaro was saying hello to Watkins and other Parks enthusiasts when Watkins made a splash pointing out her apparel.

Printed on her black tee was Josh D’Amaro’s face in a fabulous retro style cascading print, complete with his name in large font. Streaming the Magic, who visits the Parks to stream various shows and spectaculars, was on hand to see the crowds erupt in applause!

We spotted Watkins in her amazing Parks getup and snagged a closeup of her amazing tee. Made by Nemo Shirts, the Josh D’Amaro t-shirt is made in the U.S.A. and reminds us so much of the 1980s and 1990s Picture in Picture Sears Portrait Studio photos! You can even yours on a sweatshirt, tee, tank, or hoodie for under $25.00.

Another Disney face making the rounds in the Parks will be Jeff Vahle. Previously heading up The Disney Cruise Line, Vahle is now the President of Walt Disney World Resort, specifically. Vahle oversees a workforce of more than 77,000 Cast Members at four theme parks and 30 Disney Resort hotels, all located at the world’s premier vacation destination. Inside the Magic’s Kelly spotted him for a selfie at Magic Kingdom, but sadly, didn’t have a shirt with his face on it!

What Disney Parks icon are you wishing to meet? Will you slap their face on a shirt? Leave us a comment below!