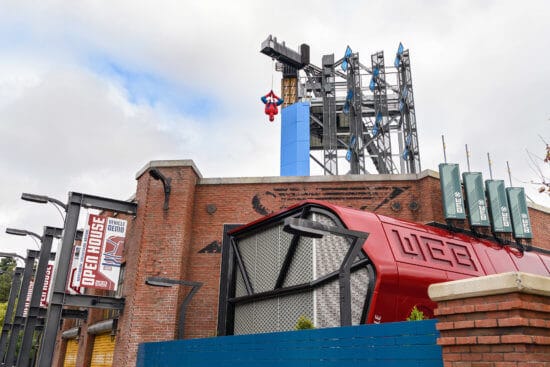 For well over a year, Disney Park Guests have become accustomed to virtual queues for popular attractions. But are these the future of Disney Parks? Chairman Josh D’Amaro recently commented on virtual queues and hints that they are ushering in the “next era” of the theme park experience.

Virtual queues were introduced to Disneyland Resort back in January 2020 with the grand opening of Star Wars: Rise of the Resistance, the E-ticket attraction at Star Wars: Galaxy’s Edge. Guests use the Disneyland app to join a Boarding Group (get their place in the virtual queue) at a designated time of day. If they are lucky enough to snag a Boarding Group, then they will receive a notification to their mobile device as soon as it is their turn to return to the attraction and ride it.

Soon after Disneyland Park and Disney California Adventure Park reopened on April 30, 2021, another virtual queue was announced — a virtual queue for Indiana Jones Adventure in Adventureland in Disneyland. This is not a virtual queue that is in place all the time. Rather, it is only used when Disney needs to manage crowd levels. And, unlike the Boarding Group system for Rise of the Resistance, Guests don’t need to join the virtual queue at a designated time of day on the Disneyland app. If the virtual queue is activated, Guests can join it at any time of day as long as there is room to do so. It works a lot like a FASTPASS (though that amenity is still suspended).

The WEB SLINGERS virtual queue is also highly important because, during times of day when Avengers Campus is at capacity, the only way to guarantee access into the land is if you have a Boarding Group for WEB SLINGERS.

This — as well as the virtual queue system as a whole — has caused some frustration among Guests. Many don’t mind the virtual queues, and there are some who argue that the virtual queue at Indiana Jones Adventure (which is not always in place but a great option to control crowds) should be rolled out to other popular attractions at the Resort, like Radiator Springs Racers in Cars Land or Snow White’s Enchanted Wish.

But there are others who do not like that the new, highly popular rides like WEB SLINGERS and Rise of the Resistance don’t even have the option of a standby queue. If a Guest isn’t lucky enough to score a Boarding Group, then they will not be allowed to ride the attraction. And if you are spending hundreds, if not thousands of dollars to come to the Happiest Place on Earth for a vacation, it can be disappointing if you can’t ride one of the newest rides because of the limited availability of Boarding Groups.

So, are virtual queues here to stay? Well, it looks like they signal the next era of the theme parks, according to Disney executives.

In a new interview with the Los Angeles Times, Disney Parks, Experiences and Products Chairman Josh D’Amaro commented on virtual queues at the Disneyland Resort, specifically when it comes to Avengers Campus:

Despite social media posts from park visitors complaining about not getting access to the superhero campus in the first few days after it opened, D’Amaro said the virtual queuing system has been a “solid tool” that ensures that most parkgoers are able to visit the new campus.

“I feel like we have done a really nice job of setting up for this next era of theme park experience,” he said.

Given what we know about the virtual queue system, it’s no surprise that D’Amaro shared this sets up “the next era of theme park experience.” Disney hasn’t commented on whether other attractions could be added to a virtual queue system — whether that is the Boarding Group system that Rise of the Resistance introduced or the other virtual queue system that was rolled out as a test for Indiana Jones Adventure. However, we wouldn’t be surprised if we saw more virtual queues in the future as Disney continues to implement it as needed for Indy.

One thing seems pretty certain — virtual queues aren’t going anywhere. And if more are introduced to the theme parks — especially for any new attractions coming to Walt Disney World Resort — we’ll be sure to report back.

So, what do you think? Do you want Disney to bring more virtual queues to the theme parks? Would you rather have FASTPASS back and do away with the virtual queue system altogether?