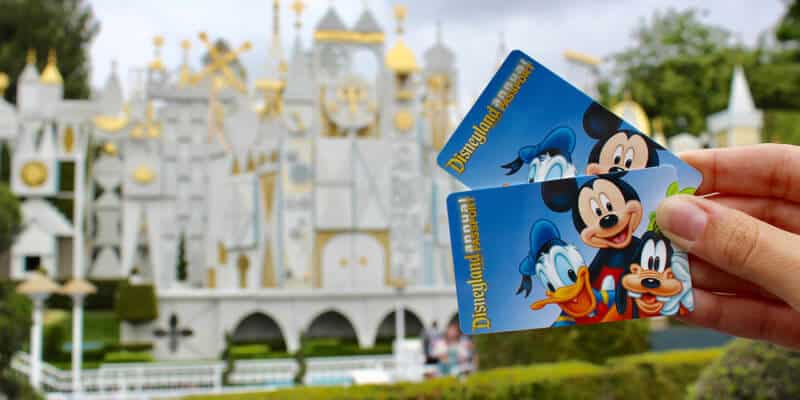 On January 14, 2021, not only did Disneyland fans have to deal with the continued theme park closure due to COVID-19, but tens of thousands of Disneyland Annual Passholders were informed that Disney would be “sunsetting” the current Passholder program. That meant that when Disneyland and Disney California Adventure opened, they would not be able to simply walk in and enjoy the Happiest Place on Earth as they once had.

Even though they were ending the Annual Pass Program, Disneyland still let former Annual Passholders — now known as Legacy Passholders — use their Annual Passes for discounts on food and merchandise in Downtown Disney and the theme parks when they reopened. Disney has announced that the discount perk will remain in place until a new Annual Pass program is announced.

But now, it seems that an announcement could be just a short time away! Disney executives have announced that Annual Passes should be coming later this year, but Disney Parks, Experiences and Products Chairman Josh D’Amaro recently came out and said that details about the Annual Passes would be coming soon.

In an article by the Los Angeles Times, D’Amaro spoke about Disneyland’s reopening and how attendance amongst former Annual Passholders will be addressed. Per the LA Times:

The annual pass program — which was canceled in January and which experts blamed for some of the parks’ crowding problems — will be replaced with a membership program that “will reflect the behavior of our superfans,” D’Amaro said, adding that more details will be released “relatively soon.”

We don’t know how soon “relatively soon” is, but we will report back when we find out!

Disneyland Resort President Ken Potrock has also spoken about the new Annual Passes coming to Disneyland. He agrees that Disneyland superfans — and there are a lot of those who frequently visited the local theme park — will respond positively to the new offerings and changes coming to the Annual Pass program.

“We’re working on that right now and we’ll clearly be launching something before the end of the year, but I think its gonna be an exciting new program that I think people and our biggest fans and quite honestly our most loyal fans will be very responsive too.”

In his interview, D’Amaro also stated that one post-pandemic aspect of Disneyland will remain in place — the theme park reservation system. Requiring Guests to make a reservation for Disneyland and Disney California Adventure will allow capacity to remain at a sustainable level and ensure that no one will be turned away from the gates due to overcrowding.

Will you be purchasing an Annual Pass when Disneyland reinstates the program? Let us know in the comments!

CLICK HERE to begin booking your Disneyland Resort vacation with our friends at Academy Travel today!