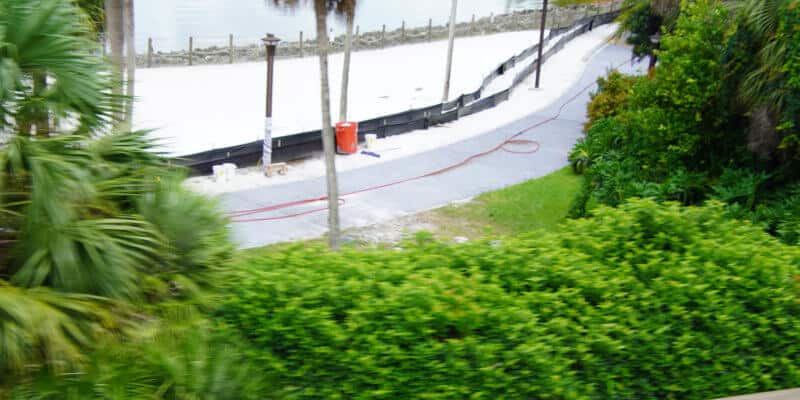 Back in 2019, Disney announced some exciting news regarding improvements that were being made in Walt Disney World. Some of these changes included walkways, tram loading and unloading zones, and more. One of the biggest concerns for many Disney fans was the removal of Disney’s Walk Around the World bricks.

Disney fans had the opportunity to be a part of the Walt Disney World Resort by being a sponsor and purchasing their very own brick that would be displayed among the pathways to the Resorts around Magic Kingdom & Ticket and Transportation Center. We now have confirmation that the last section of the Walkway Around the World bricks have been removed.

Recently, Bioreconstruct on Twitter shared the last section located on the sidewalk between Disney’s Polynesian Village Resort and the Grand Floridian is near completion and included an image of the last section before it was removed.

Monorail view showing that walkway replacement is nearly complete between Grand Floridian and Polynesian. This area had the last section of Walkway Around The World bricks.

May 9 photo of the last section of Walkway Around the World. Sidewalk between Polynesian and Grand Floridian. Note monorail in background.

May 9 photo of the last section of Walkway Around the World. Sidewalk between Polynesian and Grand Floridian. Note monorail in background. pic.twitter.com/08cYl68Zz7

So what has happened to these bricks that were purchased by thousands of Disney Guests? According to Disney Parks Blog in 2019,

As work continues to transform the arrival experience, the bricks from “Disney’s Walk Around the World” near Magic Kingdom Park and the Transportation and Ticket Center will begin to be retired in the coming months. These bricks were sold with the commitment that they would be displayed until 2011. Since the bricks were not designed to be removed individually, they will not be available to take home. Instead, guests who sponsored a brick may purchase a commemorative version between now and Aug. 31, 2019, or while supplies last.

For Guests who did not participate in the original “Disney’s Walk Around the World” program but would like to purchase a personalized brick, souvenir bricks are available to customize and purchase starting at $29.99 (plus tax and optional shipping). These are on sale now at Tomorrowland Light & Power Co. at Magic Kingdom Park (separate theme park admission required to enter) or the Marketplace Co-Op (at Disney Springs), or later on shopDisney.com starting this spring.

Did you purchase one of these iconic Disney bricks? How do you feel about this change? Let us know your thoughts in the comments below!

Let Academy Travel take care of your Disney vacation! These professionals are EarMarked Diamond and can help you plan your best Disney trip yet!