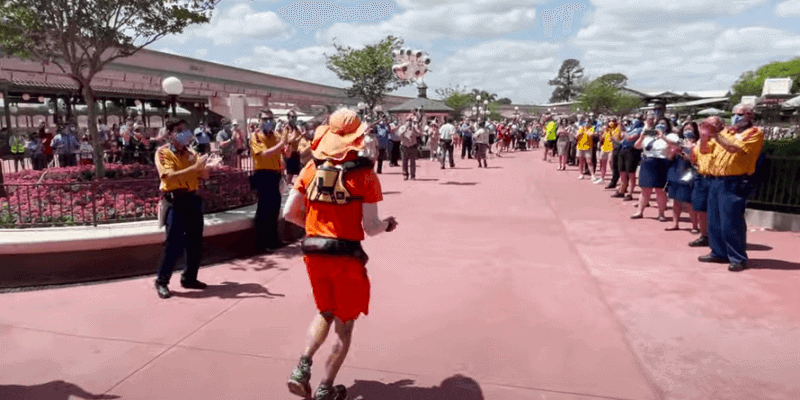 Credit: Wish Upon A Run

Don Muchow had a huge dream. He dreamed of becoming the first person to run from Disneyland in California to Walt Disney World, Florida — and now, he has reached his goal!

This 59-year-old man from Plano, Texas, had a dream so big, and the pandemic and the 2,761 miles across the country he would have to tackle did not stop him.

Don Muchow’s Type 1 diabetes inspired his grand idea of helping others with this disease by encouraging them to walk, run, or ride.

“I never considered quitting even once,” Muchow said, according to the Orange County Register. “COVID didn’t change my mission: I want every single person with Type 1 diabetes to see that we can still dream big, despite the very real 24/7 challenges and risks involved in balancing insulin, blood glucose, food and activity.”

This incredible marathon started back in Feb 2020 in California. With the pandemic on the rise, Disney World and Disneyland‘s Parks closed, it left the “Mouse2Mouse” marathon at a standstill.

As COVID-19 spread, Muchow decided to pause his dream in October 2020, when Don arrived in Texas. OC Register reported:

“We didn’t want to give or get COVID, especially because folks with Type 1 have a greater risk of developing severe COVID,” Muchow said via email. “I also thought it would be selfish to risk an injury that might require medical care when our healthcare folks and hospitals were so overwhelmed by life-and-death situations.”

But as we previously reported, Don Muchow started running again — and today, we’re excited to share that he has made it to Magic Kingdom!

Wish Upon A Run celebrated and shared this amazing video of Don running toward Magic Kingdom and becomes the first person to ever run this unthinkable marathon. In the video, you can see the crowd of Cast Members cheering on Don as he reaches his goal and makes it to the Most Magical Place on Earth.

Below, you can read the description of the video and watch this Disney marathoner cross his finish line:

First person to ever run from Disneyland to Walt Disney World ! 2800 MILES!

Minds officially blown. Disney security, cast members & guests cheered as Don ran up to the entrance, loaded him down with a custom Mickey cap, balloons & more. He was greeted by the Walt Disney World park president & other leaders, assigned an official photographer & guest relations reps who took him into the park, to the front of the line on Its A Small World (his favorite ride) and gifted Don with a Mickey Mouse ice cream which was his only request.

Most important of all, he met a Disney security staffer whose adult daughter has #type1diabetes​ and had multiple guests in the park approach and give a shoutout for their #t1d​ family members.

It is very inspiring to see someone like Don, with such spirit and a courageous heart, despite all the odds against him, to pursuing his dream and making it a reality. Now enjoy Walt Disney World Resort, Don — you earned it!

Have you entered the Walt Disney World marathons before? Or have you ever wanted to run from Disneyland to Disney World like Don did? Let us know your story in the comments below!

Do you need help planning your next Walt Disney World Trip? We can help! Click this link for more information!

Comments Off on VIDEO: Man Runs Cross Country From Disneyland to WDW!