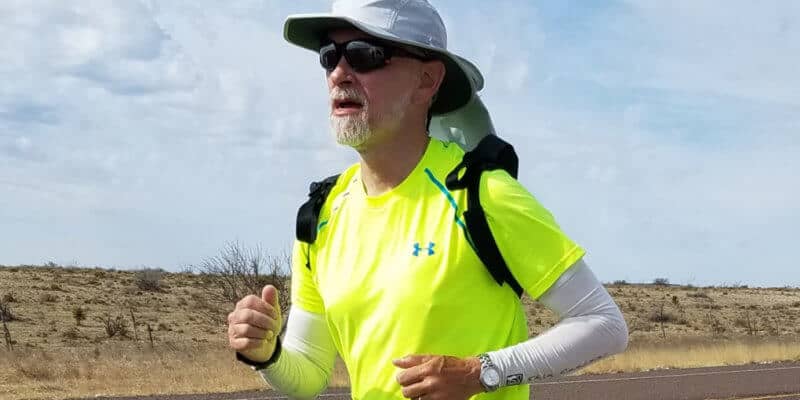 Here’s a story of a man truly willing to beat the odds and go the distance.

Ultra-marathoner, Don Muchow, is on a quest to run from Disneyland in California to Walt Disney World in Florida. The total distance: 2,830 miles!

Muchow began his run dipping his toe in the Pacific Ocean at Newport Beach, California, on February 1, 2020. He then ran the 14 miles Harbour Blvd. in Anaheim to the esplanade between Disneyland Park and Disney’s California Adventure Park. After checking off his first Disney park, he headed east. Already six days into his run, the man still has 88 days to go before he reaches Walt Disney World and another four days until his destination, Melbourne, Florida. Muchow is scheduled to dip his toes in the Atlantic Ocean on May 8, 2020.

If he succeeds, Muchow will be the first person ever to run from Disneyland to Walt Disney World.

But Muchow is running this race for more significant reasons than Disney. The established ultramarathoner is a Type 1 Diabetic, and he strives to use his platform to be an example to all those also suffering from Type 1. On his website t1determined.com, he shares his mission statement, which reads:

Connecting and empowering people with Type 1 diabetes to walk, run, ride and play with confidence!

Don Muchow’s run will take him across nine different states. Crossing the Rocky Mountains, he’ll reach elevations as high as 5,200 feet. He’ll cross the Mojave Desert and run through Phoenix and Tucson, Arizona, to reach El Paso, Texas, by March.

Once he makes it through one of the largest states in our Union, our runner will dash through the Southland. Starting with Arkansas, he’ll cross the Mississippi at the start of April. Then, he’s into the longleaf pine-lined roads of Mississippi, Alabama, and Georgia.

Upon entering Florida, he’ll pass through the capital city, Tallahassee, then head south along US 98 before making a wide left turn through Walt Disney World and to the cool Atlantic waters of Melbourne and the Space Coast.

Running from dawn to dust, he will average 30-40 miles a day with a support van always nearby. He’ll stop every 300 miles for rest and resupply. His longest day will be a 44-mile segment he plans to make in New Mexico, and his shortest will be 19 miles he makes during his final approach to the Magic Kingdom.

When asked what he planned to do when he got to Walt Disney World, Muchow simply said, “Eat, get a massage and go ride It’s a Small World.” He also joked that his “favorite ride” at Walt Disney World is a massage at Disney’s Grand Floridian Resort and Spa.

On any other day, Don Muchow is a Marketing Director in Plano, Texas. He, his wife, and their family are big fans of the Disney parks, visiting Walt Disney World most.

“We usually arrive by car,” Muchow said. “I’ve never run to it before.”

Muchow couldn’t be sure if he were the first person to make the run from Disneyland to Walt Disney World, but his run will be the first coast-to-coast, mouse-to-mouse run officially recorded.

Related: This Army veteran has been walking to Disney World since March

Do you think Muchow will make it to Disney World and finish his run? Do you know anybody as ambitious as him? Does this give you inspiration for your next marathon or runDisney event? Let us know in the comments!

Comments Off on From Disneyland to Disney World: Ultra-Marathoner Runs 2,830 Miles in Between