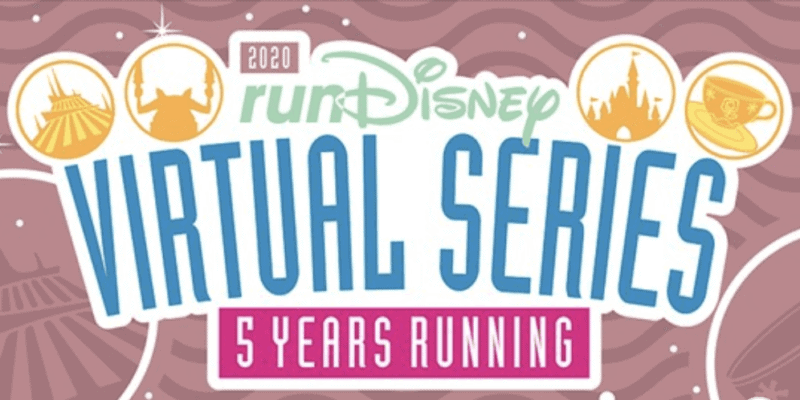 To all who run these happy RACES, WELCOME! , runDisney is giving Disney Parks fans a party favor! Taking place June 1, 2020 – August 31, 2020, is the next installment of races, which were voted on at D23 by the Parks fans themselves. The celebratory attractions chosen for the summer’s runDisney virtual challenge are Space Mountain, Mad Tea Party, and The Haunted Mansion!

If you’ve never experienced a runDisney virtual race or done any at-home virtual racing for yourself, it’s a piece of cake! You’ll choose your own racing location like a gym, local trail, sidewalk, or even a treadmill. Bringing the magic to your sneakers, the virtual 5ks (previously known as Disney running shorts) have a lot of support from runners looking to jumpstart their training, keep the magic at home, and to celebrate a run with family and friends. Several running buddies from one town will often sign up together and informally hold a fun run together! Because isn’t Walt Disney World Resort and Disneyland more fun with a friend?

How to Sign up for the runDisney Virtual Races

Previous Disney virtual series have featured Marvel Superheroes such as Captain Marvel or Ironman and several Star Wars characters we love, but these little theme parks inspired running shorts are topping our list! Keep in mind that they are at home, not in the Parks, so you won’t have a fitness Expo to attend or commemorative items to buy, but you sure will love the shiny souvenirs you’ll earn. runDisney enthusiasts can sign up for one race, or all three to complete the runDisney Virtual Challenge, which includes all three months, and earns you a fourth bonus medal! That’s right, more bling! Registration opened in March, according to runDisney.com, and foolish mortals caused event sell-outs in near-record timing. There are no windows and no doors to let you escape the craving for a commemorative medal!

You can print out your own runDisney virtual series downloadable race bib (one for each race) by visiting the virtual series webpage, or even print out mile marker signs to give you encouragement as you complete each virtual 5K. The Disney race series is a great way to runDisney in the safety of your own uncrowded neighborhood.

@indyandi4 and her running partner don some fun running costumes in the forms of Cheshire Cat and the Caterpillar for the Mad Tea Party themed 5k at home. Aren’t his little hands on his running shirt fun?! chEARS to these running buddies.

Check out @3babykoi on her Tomorrowland 5k race! She’s ready to “do it tomorrowland” in some adorable themed racing gear.

@laurafrye_nyc is looking spooky in her socially distanced 5k getup. Matching facemask, shoes, and Minnie ears give her an aura of foreboding as she hits the pavement on “Medal Monday.”

@the.counseling.unicorn has her races capped off with the challenge medal, racing to victory for months with a virtual race every month since March of 2020. Way to go! You are a champ!

Check out runDisney’s Facebook post, which shared their recent blog post and shared the big news! You can see the Magic Kingdom theme park icons depicting Space Mountain, the Sconce from Haunted Mansion, Cinderella Castle and a Hatter Teacup… that’s your tip-off for the Attractions based runs! If a Disney fan clicked the post, they would be directed to the runDisney blog.

Parks-based merchandise and events have been all the rage lately, and I’m glad to see it. While there are a ton of Disney fans in general, Parks fans haven’t been catered to very much. With the advent of the Minnie Mouse: The Main Attraction series and these runDisney virtual races, we’re fit to be tied.

When you’re finished racing through your home streets with this runDisney virtual 5k series, ready your suitcase to try a big race through the Disney Parks! Call Academy Travel at 609-978-0740. Academy Travel is an Authorized Disney Vacation Planner and has been designated as a Diamond EarMarked Travel Agency specializing in Walt Disney World, Disneyland Resort, Disney Cruise Line, Adventures by Disney Vacations and Aulani, a Disney Resort & Spa.

Which race theme are you most excited about? Leave us a comment below!

Comments Off on The 2020 runDisney Virtual Races are Parks Attraction Inspired!