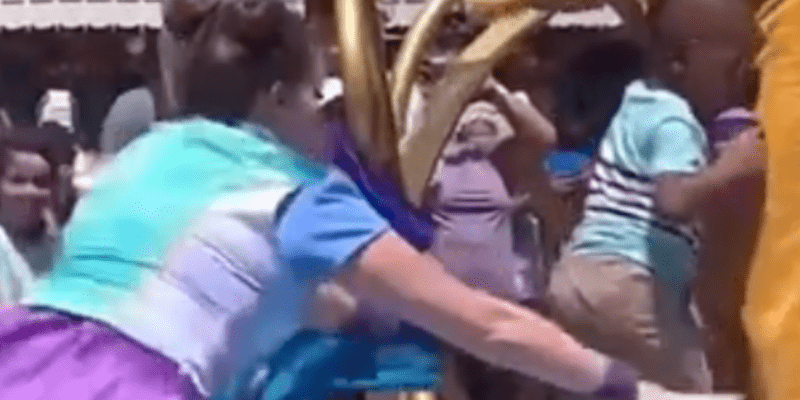 A popular Disney parade recently had to come to a stop after a child leaped onto a float and was corralled by a Disney Cast Member.

When visiting Walt Disney World Resort, Disney Park Guests are completely immersed in the magic. They have the opportunity to ride iconic attractions at Magic Kingdom, EPCOT, Disney’s Animal Kingdom, and Disney’s Hollywood Studios, as well as plenty of other offerings, including many forms of entertainment.

One of the most popular offerings are two beloved Disney parades, Festival of Fantasy, which makes its way around Magic Kingdom at both 12:00 p.m. and 3:00 p.m. each day, and Mickey’s Celebration Cavalcade.

A child ran in front of a parade float and jumped onto it in an attempt to meet Pluto. A Disney Cast Member chased after them and corralled him before he made it to the Disney character.

As you can see, when the Disney Cast Member jumps onto the float to catch the child, they nearly trip. When the child gets onto the float, you can also see the float come to a stop until he could be removed.

Mickey’s Celebration Cavalcade is a new cavalcade floating through Magic Kingdom Park as part of The World’s Most Magical Celebration.

You can find your favorite spot along the parade route—from Frontierland through Liberty Square down Main Street, U.S.A.—and party with the EARidescent 8 as they rock out in their snazzy new 50th anniversary looks.

What do you think of this recent incident in the Disney parade? Let us know in the comments!