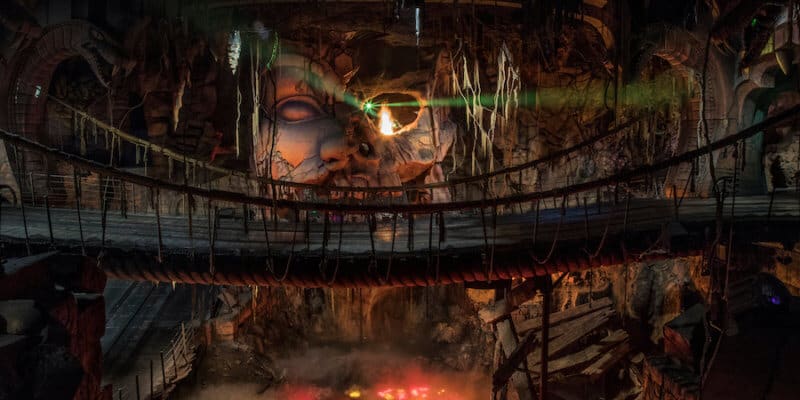 It was her first day out of training at Disneyland Park, and this Disney Cast Member got the one position she didn’t want: tower at Indiana Jones Adventure.

At tower, Cast Members meticulously watch cameras placed throughout the ride and ensure everything runs smoothly. It’s a highly detail-oriented and safety-critical position. The Cast Member knew she couldn’t get up from her seat, but she didn’t expect a phone call leading to a police investigation!

@sweetnspicytravels shared this story from her time at Disneyland Resort on TikTok:

The phone rang only a few minutes after she sat down. When she answered, another Cast Member asked her if there was a wallet in the room with her. Though she didn’t see a wallet at first, she found it behind the phone. The person on the line asked her how much money was in it.

The Cast Member opened the wallet to check, not thinking to ask another Cast Member to check with her so that she had a witness. There was no money in the wallet. The Cast Member explained that to the person on the phone and went about her day.

However, when the Cast Member got to work the next day, a manager pulled her into a conference room and was interrogated by a detective. When the wallet was found abandoned in a ride vehicle, Cast Members called Guest Services at City Hall and let them know a wallet with a significant amount of cash had been found. City Hall told the Guest who owned the wallet that it was recovered with all of the money inside, and the Guest returned to Indiana Jones Adventure to collect the wallet – which had been emptied sometime in between being searched, tucked away in tower, and found by this Cast Member.

“The only person who could’ve taken that money would have to have been a Disney Cast Member,” she explained.

“How is it that the managers called to tower a couple of times, and every other Cast Member in tower said, ‘No, I do not see a wallet.’ But you magically found this wallet?’” the detective reportedly asked her. She tried to explain that tower is a small area, so there wasn’t another place it could have been besides behind the phone.

The detective then interrogated her about other Cast Members that had been at tower that day and if she “thought they were trustworthy.” Since it was only her first day out of training, she barely knew most of the other Cast Members, let alone if they could be trusted!

She explained that her biggest fear is being falsely accused of a crime, as she was blamed for many problems around the house growing up.

“I never heard anything again from the detective or the managers, so they must have figured out who did it,” she said. “But d*mn, that was scary, and I never want to have to be interrogated again.”

Commenters told her that you should always have a second person to look inside a Guest’s purse or wallet – and to never talk to a detective or police officer without representation. She agreed, noting that she was young, nervous, and new, but she would handle it much differently today!

If you lose anything at the Disney Parks, you can file a lost item report at Guest Services for the quickest return of your items!