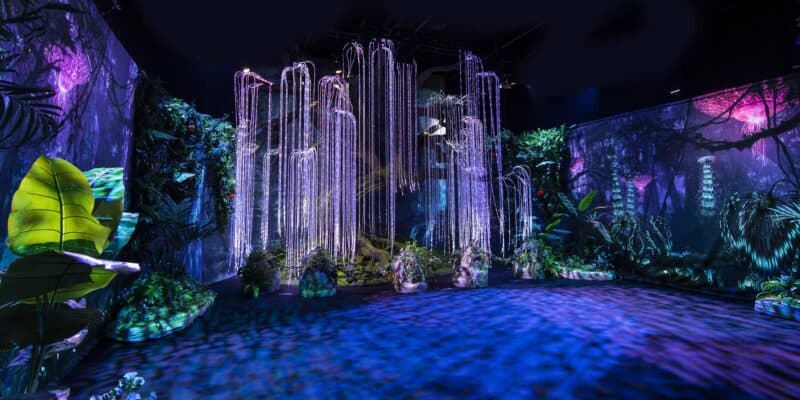 With the blue Na’vi taking over cinemas once more, and James Cameron’s second Pandorian outing coming this Christmas season, it certainly feels like it. And to celebrate all things Avatar (2009) and the forthcoming sequel, Avatar: The Way of Water (2022), one Disney Resort had a massive Pandora-themed event including a shockingly surprising castle takeover.

Director James Cameron’s Avatar stole the decade when the game-changing CGI, 3-D, motion capture spectacular debuted in movie theaters and became the world’s highest-grossing film of all time. It was usurped, briefly, by Marvel Studios and Kevin Feige’s Avengers: Endgame (2019), but quickly reclaimed its title after a re-release in China in March 2021.

Having taken back the most prolific crown in filmmaking in China, the country was the perfect place to celebrate the movie’s re-release as well as entice fans back to Pandora for The Way of Water. Shanghai Disney Resort officially opened the Avatar: Explore Pandora exhibition as well as showcased a first-ever 4K screening of Avatar, and revealed a stunning Enchanted Storybook Castle takeover in Shanghai Disneyland.

It’s the wonder of Pandora. Check out our favorite moments from Shanghai Disney Resort’s celebration of Avatar, including the opening of the Avatar: Explore Pandora exhibition, a first-time 4K screening, and an incredible castle projection.

It’s the wonder of Pandora 💙 Check out our favorite moments from Shanghai Disney Resort’s celebration of Avatar, including the opening of the Avatar: Explore Pandora exhibition, a first-time 4K screening, and an incredible castle projection. pic.twitter.com/Bv1LvryXWC

Found in Pudong, Shanghai, China, at the Shanghai Disney Resort Guests wanting to experience the Avatar: Explore Pandora exhibition can do so until March next year. As for the other Disney Parks worldwide, nothing has been confirmed surrounding any special events but with Pandora — The World of Avatar located in Disney’s Animal Kingdom at the Walt Disney World Resort, it seems unlikely that Disney won’t do anything here in the lead up to the release of Avatar: The Way of Water.

Cameron’s Avatar: The Way of Water releases on December 16, 2022, and sees Sam Worthington and Zoe Saldaña reprise their respective roles as Jake Sully and Neytiri. Sigourney Weaver is also back for the Avatar sequel, although here the Alien franchise actress will play Kiri — Jake and Neytiri’s adoptive daughter — and not Dr. Grace Augustine from the first film. Academy Award winner, Kate Winslet, also makes her performance capture debut as Ronal, freediver of Metkayina.

Will you be heading to the Avatar exhibition at Shanghai Disneyland? Let us know in the comments down below!