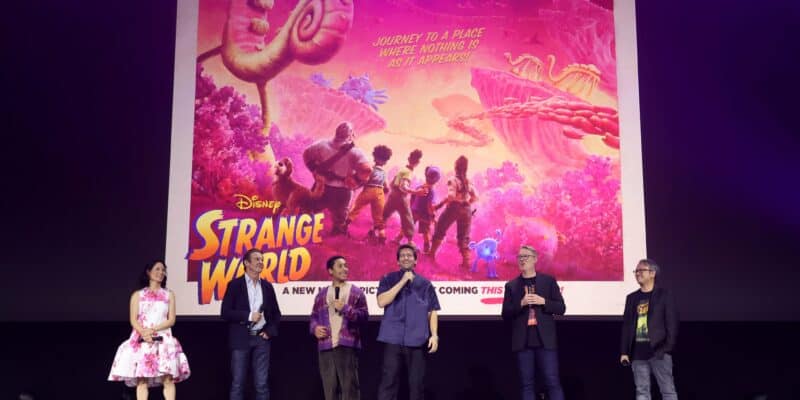 In June, Disney fans saw the first teaser trailer for Strange World, hitting theaters on November 23, 2022. Eagle-eyed viewers noted that Disney teased the film with an easter egg in Encanto (2021)!

At D23 Expo on Friday, the cast and crew of Strange World took to the stage to share an all-new for-the-room-only trailer and new details about the film:

Jake Gyllenhaal, Dennis Quaid, Jabouki Young-White, and Lucy Liu stood in front of a poster for the action-adventure film from Walt Disney Animation Studios, directed by Don Hall and written by Qui Nguyen of Raya and the Last Dragon (2021).

Revealed: MCU May Not Be Done With Jake Gyllenhaal as Mysterio

Hall said the film is inspired by “our kids” and tells a “story of family [and] the strong desire to leave them a better world.” Nguyen said the film contains an all-new world of unique creatures and “environments full of surprises and dangers.”

Young-White plays Ethan Clade, Searcher’s son, who he describes as “an incredible kid. Super excited for adventure like his grandfather, not like his dad. I feel a part of myself in him.”

Lui said her character, Callisto Mal, is a fearless leader and someone she “would aspire to be.” Quaid plays Searcher’s father, a world-famous adventurer. “He’s stubborn, but he’s a lot of fun – opinionated but, you know, take him as he is.”

Disney also shared an exclusive image from the film:

Get lost in this very STRANGE new look at Disney’s #StrangeWorld and see the movie in theaters November 23, 2022.

Get lost in this very STRANGE new look at Disney's #StrangeWorld and see the movie in theaters November 23, 2022. pic.twitter.com/fzoIU4ZwlH

Are you excited about Strange World?