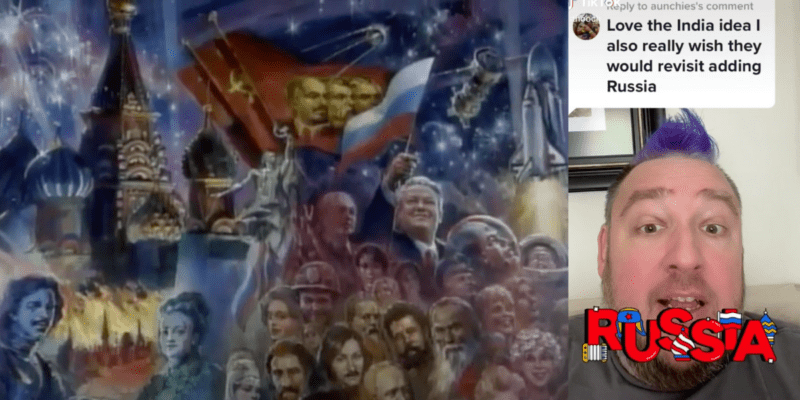 Despite political tension with the United States, Walt Disney World Resort developed a close relationship with Russian officials, going so far as to create a promotional video in 1992 that was never released but leaked on YouTube in 2019:

According to the video, the pavilion would’ve been centered around a recreation of St. Basil’s Cathedral. “Russia – The Bells of Change,” a show combining audio-animatronics, film footage, and actors sharing Russian history, would have been the central attraction. Also proposed was a sled ride through natural Russian scenery and a ride-through attraction based on The Fool and the Fish, a famous Russian folktale.

Former Cast Member @sthooch shared a story on TikTok from a family friend who was involved with the Russian pavilion:

“I know a lot of people wish that Russia would still happen, but I don’t believe it’s going to happen at this point,” the former Cast Member explained. Over the years, his family became friends with a spokesperson for Mikhail Gorbachev, former President of the Soviet Union. The family friend confirmed that Gorbachev was involved with Walt Disney World Resort’s plan for Russia in EPCOT.

“He was the Russian official that they flew over EPCOT in the helicopter and gave his daughter a giant Mickey Mouse and everything to show him where the pavilion would go and that type of thing. But unfortunately, it just never materialized,” the former Cast Member said.

The Soviet Union fell in 1991, leading to economic turmoil. The government of Russia decided not to move forward with sponsoring the pavilion at EPCOT.

Though some fans in the comments of @sthooch’s video said they’d like to see the Russia pavilion materialize, it’s unlikely given the conflict between Russia and Ukraine. The Walt Disney Company was the first film studio to halt Russian movie releases in February after Vladimir Putin sent Russian forces to invade Ukraine. A few days later, Disney Cruise Line announced they would officially remove St. Petersburg, Russia, as a port of call.

What country would you like to see added to EPCOT?